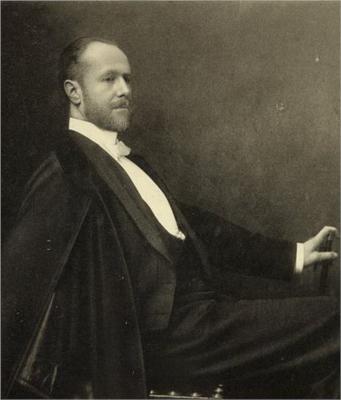 Fernand Khnopff was born to a wealthy family that was part of the high bourgeoisie for generations. Khnopff's ancestors had lived in the Vossenhoek area of Grembergen Flanders since the early 17th century but were of Austrian and Portuguese descent. Most male members of his family had been lawyers or judges, and young Fernand was destined for a juridical career. In his early childhood (1859–1864), he lived in Bruges where his father was appointed Substitut Du Procureur Du Roi. His childhood memories of the medieval city of Bruges would play a significant role in his later work. In 1864, the family moved to Brussels. In his childhood Khnopff spent part of his summer holidays in the hamlet of Tillet not so far from Bastogne in the Luxemburg province where his maternal grand parents owned an estate. He painted several views of this village.

To please his parents, he went to law school at the Free University of Brussels (now divided into the Université Libre de Bruxelles and the Vrije Universiteit Brussel) when he was 18 years old. During this period, he developed a passion for literature, discovering the works of Baudelaire, Flaubert, Leconte de Lisle and other mostly French authors. With his younger brother Georges Khnopff – also a passionate amateur of contemporary music and poetry – he started to frequent Jeune Belgique ("Young Belgium"), a group of young writers including Max Waller, Georges Rodenbach, Iwan Gilkin and Emile Verhaeren.

Khnopff left University due to a lack of interest in his law studies and began to frequent the studio of Xavier Mellery, who made him familiar with the art of painting. On 25 October 1876, he enrolled for the Cours De Dessin Après Nature ("course of drawing after nature") at the Académie Royale des Beaux-Arts. At the Académie, his most famous fellow student was James Ensor, whom he disliked from the start. Between 1877 and 1880, Khnopff made several trips to Paris where he discovered the work of Delacroix, Ingres, Moreau and Stevens. At the Paris World Fair of 1878 he became acquainted with the oeuvre of Millais and Burne-Jones. During his last year at the Académie in 1878–1879 he neglected his classes in Brussels and lived for a while in Passy, where he visited the Cours Libres of Jules Joseph Lefebvre at the Académie Julian.

In 1881, he presented his works to the public for the first time at the "Salon de l'Essor" in Brussels. The critics' appraisal of his work is very harsh, with the exception of Emile Verhaeren who writes a commending review. Verhaeren would remain a lifelong supporter and would write the first monography of the painter. In 1883, he was one of the founding members of the group Le Groupe des XX. Khnopff exhibited regularly at the annual "Salon" organised by Les XX. In 1885, he met the French novelist Joséphin Péladan the future grandmaster of the Rosicrucian "Ordre de la Rose + Croix". Péladan asked Khnopff to design the cover for his new book "Le Vice suprême". Khnopff accepted this commission but destroyed the work later because the famous soprano Rose Caron was offended by the imaginary portrait of Leonora d'Este (a character in Péladan's Le Vice suprême) that Khnopff had designed to adorn the cover and in which Caron believed to recognise her own face. The vehement reaction of "La Caron" on this occasion made a scandal in the Belgian and Parisian press and would help to establish Khnopff's name as an artist. Khnopff continued to design illustrations for the works of Péladan, most notably for "Femmes honnêtes" (1888) and "Le Panthée" (1892). On several occasions (1892, 1893, 1894 and 1897) Khnopff was invited as guest of honour on the exhibitions of the Parisian "Salon de la Rose + Croix" organised by Péladan.