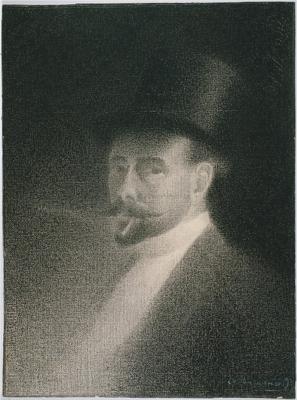 Charles Angrand (19 April 1854 – 1 April 1926) was a French artist who gained renown for his Neo-Impressionist paintings and drawings. He was an important member of the Parisian avant-garde art scene in the late 1880s and early 1890s.

He received artistic training in Rouen at Académie de Peinture et de Dessin. His first visit to Paris was in 1875, to see a retrospective of the work of Jean-Baptiste-Camille Corot at École des Beaux-Arts. Corot was an influence on Angrand's early work.

After being denied entry into École des Beaux-Arts, he moved to Paris in 1882, where he began teaching mathematics at Collège Chaptal. His living quarters were near Café d'Athènes, Café Guerbois, Le Chat Noir, and other establishments frequented by artists. Angrand joined the artistic world of the Parisian avant-garde, becoming friends with such luminaries as Georges Seurat, Vincent van Gogh, Paul Signac, Maximilien Luce, and Henri-Edmond Cross. His avant-garde artistic and literary contacts influenced him, and in 1884 he co-founded Société des Artistes Indépendants, along with Seurat, Signac, Odilon Redon, and others.

Angrand's Impressionist paintings of the early 1880s, generally depicting rural subjects and containing broken brushstrokes and light-filled colouration, reflect the influences of Claude Monet, Camille Pissarro, and Jules Bastien-Lepage. Through his interactions with Seurat, Signac, and others in the mid-1880s, his style evolved towards Neo-Impressionism. From 1887 his paintings were Neo-Impressionist and his drawings incorporated Seurat's tenebrist style. Angrand had the "ability to distil poetry from the most banal suburban scene". In 1887 he met van Gogh, who proposed a painting exchange (which ultimately did not happen). Van Gogh was influenced by Angrand's thick brushstrokes and Japanese-inspired compositional asymmetry. Also in 1887, L'Accident, his first Divisionist painting, was exhibited at the Salon des Indépendants. Angrand joined Seurat in plein air painting on La Grande Jatte island.

Angrand's implementation of Pointillist techniques differed from that of some of its leading proponents. He painted with a more muted palette than Seurat and Signac, who used bright contrasting colours. As seen in Couple in the street, Angrand used dots of various colours to enhance shadows and provide the proper tone, while avoiding the violent colouration found in many other Neo-Impressionist works. His monochrome conté crayon drawings such as his self-portrait above, which also demonstrate his delicate handling of light and shadow, were assessed by Signac: "... his drawings are masterpieces. It would be impossible to imagine a better use of white and black ... These are the most beautiful drawings, poems of light, of fine composition and execution."

Angrand exhibited his work in Paris at Les Indépendants, Galerie Druet, Galérie Durand-Ruel, and Bernheim-Jeune, and also in Rouen. His work appeared in Brussels in an 1891 show with Les XX. In the early 1890s, he abandoned painting, instead creating conté drawings and pastels of subjects including rural scenes and depictions of mother and child, realized in dark Symbolist intensity. During this period, he also drew illustrations for anarchist publications such as Les Temps nouveaux; other Neo-Impressionists contributing to these publications included Signac, Luce, and Théo van Rysselberghe.