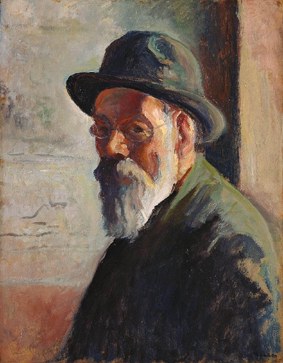 Maximilien Luce (13 March 1858 – 6 February 1941) was a prolific French Neo-impressionist artist, known for his paintings, illustrations, engravings, and graphic art, and also for his anarchist activism. Starting as an engraver, he then concentrated on painting, first as an Impressionist, then as a Pointillist, and finally returning to Impressionism.

Maximilien Luce (13 March 1858 – 6 February 1941) was a prolific French Neo-impressionist artist, known for his paintings, illustrations, engravings, and graphic art, and also for his anarchist activism. Starting as an engraver, he then concentrated on painting, first as an Impressionist, then as a Pointillist, and finally returning to Impressionism.

Maximilien-Jules-Constant Luce was born on 13 March 1858 in Paris. His parents, of modest means, were Charles-Désiré Luce (1823–1888), a railway clerk, and Louise-Joséphine Dunas (1822–1878). The family lived in the Montparnasse, a working-class district of Paris. Luce attended school at l'Ecole communale, beginning in 1864.

In 1872, the fourteen-year-old Luce became an apprentice with wood-engraver Henri-Théophile Hildebrand (1824–1897). During his three-year xylography apprenticeship, he also took night classes in drawing from instructors Truffet and Jules-Ernest Paris (1827–1895). During this period, Luce started painting in oils. He moved with his family to the southern Paris suburb of Montrouge. His art education continued as he attended drawing classes taught by Diogène Maillard (1840–1926) at the Gobelins tapestry factory.

Luce began working in the studio of Eugène Froment (1844–1900) in 1876, producing woodcut prints for various publications, including L'Illustration and London's The Graphic. He took additional art courses, at l'Académie Suisse, and also in the studio of portrait painter Carolus-Duran (1837–1917). Through Froment's studio, Luce became friends with Léo Gausson and Émile-Gustave Cavallo-Péduzzi. These three artists spent time around Lagny-sur-Marne creating Impressionist landscapes.

Luce spent four years in the military, starting in 1879, serving in Brittany at Guingamp. The next year, he received a promotion to corporal, and he became friends with Alexandre Millerand, who, in 1920, assumed the office of President of France. In 1881 he requested the restoration of his lower rank of soldier, second class. Carolus-Duran used his influence to get a transfer for Luce to Paris barracks. His stint in the military came to a close in 1883.

The prevalence of the new zincography printing process rendered xylography nearly obsolete as a profession. When the opportunities for employment as an engraver became scarce, Luce shifted his focus to painting full-time in about 1883.

Gausson and Cavallo-Péduzzi introduced Luce in about 1884 to the Divisionist technique developed by Georges Seurat. This influenced Luce to begin painting in the Pointillist style. In contrast to Seurat's detached manner, Luce's paintings were passionate portrayals of contemporary subjects, depicting the "violent effects of light". He moved to Montmartre in 1887. Luce joined the Société des Artistes Indépendants and participated in their third spring exhibition, where Paul Signac purchased one of his pieces, La Toilette. Camille Pissarro and critic Félix Fénéon were also impressed by the seven Luce works displayed in the show. Fénéon characterized Luce as a "coarse, honest man, with a rough and muscular talent". In addition to Pissarro and Signac, he met many of the other Neo-impressionists, including Seurat, Henri-Edmond Cross, Charles Angrand, Armand Guillaumin, Hippolyte Petitjean, Albert Dubois-Pillet, and Pissarro's son Lucien. A New York Times critic declared this Pointillist period to be the pinnacle of Luce's artistic career, singling out the radiant 1895 painting On the Bank of the Seine at Poissy as an example. He described the skillfully executed painting as "a lyrical celebration of nature".