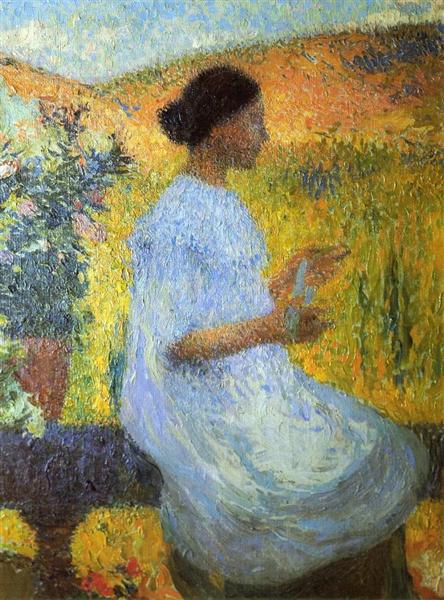 Divisionism (also called chromoluminarism) was the characteristic style in Neo-Impressionist painting defined by the separation of colors into individual dots or patches which interacted optically.

By requiring the viewer to combine the colors optically instead of physically mixing pigments, Divisionists believed they were achieving the maximum luminosity scientifically possible. Georges Seurat founded the style around 1884 as chromoluminarism, drawing from his understanding of the scientific theories of Michel Eugène Chevreul, Ogden Rood and Charles Blanc, among others. Divisionism developed along with another style, Pointillism, which is defined specifically by the use of dots of paint and does not necessarily focus on the separation of colors.

Divisionism developed in nineteenth-century painting as artists discovered scientific theories of vision that encouraged a departure from the tenets of Impressionism, which at that point had been well-developed. The scientific theories and rules of color contrast that would guide composition for Divisionists placed the movement of Neo-Impressionism in contrast with Impressionism, which is characterized by the use of instinct and intuition. Scientists or artists whose theories of light or color had some impact on the development of Divisionism include Charles Henry, Charles Blanc, David Pierre Giottino Humbert de Superville, David Sutter, Michel Eugène Chevreul, Ogden Rood and Hermann von Helmholtz.

Divisionism, along with the Neo-Impressionism movement as a whole, found its beginnings in Georges Seurat's masterpiece, A Sunday Afternoon on the Island of La Grande Jatte. Seurat had received classical training at the École des Beaux-Arts, and, as such, his initial works reflected the Barbizon style. In 1883, Seurat and some of his colleagues began exploring ways to express as much light as possible on the canvas By 1884, with the exhibition of his first major work, Bathing at Asnières, as well as croquetons of the island of La Grande Jatte, his style began taking form with an awareness of Impressionism, but it was not until he finished La Grande Jatte in 1886 that he established his theory of chromoluminarism. In fact, La Grande Jatte was not initially painted in the Divisionist style, but he reworked the painting in the winter of 1885-6, enhancing its optical properties in accordance with his interpretation of scientific theories of color and light

Charles Blanc's Grammaire des arts du dessin introduced Seurat to the theories of color and vision that would inspire chromoluminarism. Blanc's work, drawing from the theories of Michel Eugène Chevreul and Eugène Delacroix, stated that optical mixing would produce more vibrant and pure colors than the traditional process of mixing pigments. Mixing pigments physically is a subtractive process with cyan, magenta, and yellow being the primary colors. On the other hand, if colored light is mixed together, an additive mixture results, a process in which the primary colors are red, green and blue. The optical mixture which characterized Divisionism — the process of mixing color by juxtaposing pigments — is different from either additive or subtractive mixture, although combining colors in optical mixture functions the same way as additive mixture, i.e. the primary colors are the same. In reality, Seurat's paintings did not actually achieve true optical mixing; for him, the theory was more useful for causing vibrations of color to the viewer, where contrasting colors placed near each other would intensify the relationship between the colors while preserving their singular separate identity.