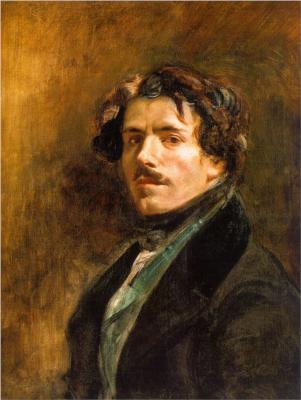 Considered the leader of the French Romantic school of painting, Eugene Delacroix was a prolific artist, producing over 9,000 works during his lifetime, ranging from paintings, to watercolors, pastels and drawings. His work both shaped the Impressionist artists and inspired the Symbolist movement. Taking inspiration from Peter Paul Rubens and the Venetian Renaissance painters, his painting style emphasized colors and movement rather than the carefully modeled form and clear outline. After completing his education in art, he submitted his first work the Paris Salon The Barque of the Dante, which was accepted, in 1822. This first piece caused a sensation and was harshly criticized, but it was nonetheless bough by the State for the Luxembourg Galleries. This began a pattern of his critical reception throughout his career. First, his work was criticized, but later accepted and purchased by the state or personal patron.

His works revolved around many themes, many of which were inspired by the works of Shakespeare, Goethe, and Byron, and entailed the motifs of violence and sensuality. Perhaps his most widely know piece is Liberty Leading the Republic, which invoked the image of liberty leading the people. The French government initially bough the painting, but soon deemed it too anti-establishment, and had it withdrawn from view. In 1832, he traveled to Morocco to escape Paris society, and experience a more primitive culture. His time there inspired over 100 paintings, and he compared the people there to the early citizens of Rome or Greece.

Perhaps the most scandalous or noteworthy aspect of Delacroix’s personal life was the fact that he was most likely the illegitimate child of Talleyrand, a French diplomat, as his father never conceived any other children. After both his father and mother died, leaving him an orphan at the age of 16, he spent much of life under the protection of the Frenchman. His legacy includes a number of portraits, landscapes, and figure paintings. He also helped found the Societe Nationale des Beaux-Arts, along with other notable French artists of the day. His face was featured on the French banknote, minted in 2003.

Ferdinand Victor Eugène Delacroix (French: [ø.ʒɛn də.la.kʁwa]; 26 April 1798 – 13 August 1863) was a French Romantic artist regarded from the outset of his career as the leader of the French Romantic school.

As a painter and muralist, Delacroix's use of expressive brushstrokes and his study of the optical effects of colour profoundly shaped the work of the Impressionists, while his passion for the exotic inspired the artists of the Symbolist movement. A fine lithographer, Delacroix illustrated various works of William Shakespeare, the Scottish author Walter Scott and the German author Johann Wolfgang von Goethe.

In contrast to the Neoclassical perfectionism of his chief rival Ingres, Delacroix took for his inspiration the art of Rubens and painters of the Venetian Renaissance, with an attendant emphasis on colour and movement rather than clarity of outline and carefully modelled form. Dramatic and romantic content characterized the central themes of his maturity, and led him not to the classical models of Greek and Roman art, but to travel in North Africa, in search of the exotic. Friend and spiritual heir to Théodore Géricault, Delacroix was also inspired by Lord Byron, with whom he shared a strong identification with the "forces of the sublime", of nature in often violent action.

However, Delacroix was given to neither sentimentality nor bombast, and his Romanticism was that of an individualist. In the words of Baudelaire, "Delacroix was passionately in love with passion, but coldly determined to express passion as clearly as possible."

Eugène Delacroix was born on 26 April 1798 at Charenton-Saint-Maurice in Île-de-France, near Paris. His mother was named Victoire, daughter of the cabinet-maker Jean-François Oeben. He had three much older siblings. Charles-Henri Delacroix (1779–1845) rose to the rank of General in the Napoleonic army. Henriette (1780–1827) married the diplomat Raymond de Verninac Saint-Maur (1762–1822). Henri was born six years later. He was killed at the Battle of Friedland on 14 June 1807.

There is reason to believe that Eugène's father, Charles-François Delacroix, was infertile at the time of Eugène's conception and that his real father was Talleyrand, who was a friend of the family and successor of Charles Delacroix as Minister of Foreign Affairs, and whom the adult Eugène resembled in appearance and character. Throughout his career as a painter, he was protected by Talleyrand, who served successively the Restoration and king Louis-Philippe, and ultimately as ambassador of France in Great Britain, and later by Talleyrand's grandson, Charles Auguste Louis Joseph, duc de Morny, half-brother of Napoleon III and speaker of the French House of Commons. His presumed father, Charles Delacroix, died in 1805, and his mother in 1814, leaving 16-year-old Eugène an orphan.

His early education was at the Lycée Louis-le-Grand, and at the Lycée Pierre Corneille in Rouen where he steeped himself in the classics and won awards for drawing. In 1815 he began his training with Pierre-Narcisse Guérin in the neoclassical style of Jacques-Louis David. An early church commission, The Virgin of the Harvest (1819), displays a Raphael-esque influence, but another such commission, The Virgin of the Sacred Heart (1821), evidences a freer interpretation. It precedes the influence of the more colourful and rich style of the Flemish Baroque painter Peter Paul Rubens, and fellow French artist Théodore Géricault, whose works marked an introduction to Romanticism in art.