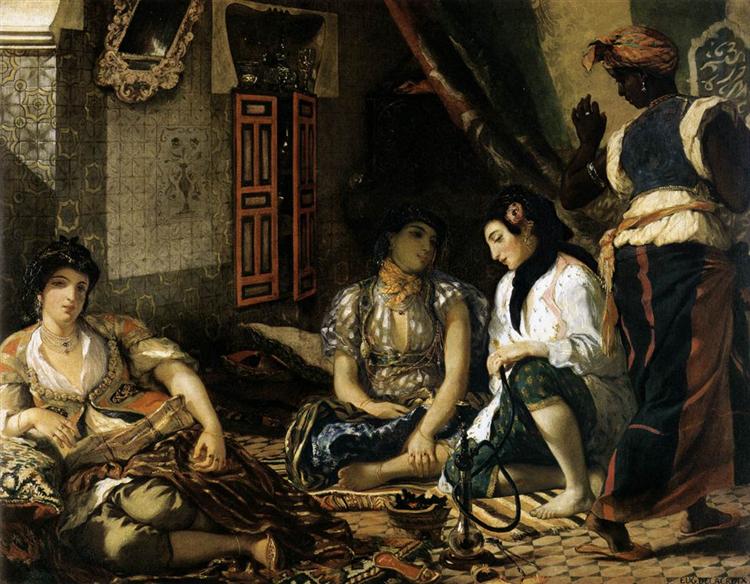 The Women of Algiers in their Apartment

The Women of Algiers caused a sensation when it was displayed at the Paris Salon on 1834. Not only was it mentionable at the time for its sexual connotations, but also for the portrayal of opium, which at the time was only included of paintings of prostitutes. This painting was also notable because it was generally difficult to paint Muslim women, who were covered head to toe, but Delacroix was secretly able to sketch some during his travels to Morocco in 1832. It was critically acclaimed when it was presented to the Salon, and King Louis Philippe bought the painting, presenting it to the Museum of Luxembourg. Seven years after Delacroix’s death, it was moved the Louvre, where it is displayed among Delacroix’s other masterful paintings.

Women of Algiers in their Apartment (French: Femmes d'Alger dans leur appartement) is the title of two oil on canvas paintings by the French Romantic painter Eugène Delacroix.

Delacroix's first version of Women of Algiers was painted in Paris in 1834 and is located in the Louvre, Paris, France. The second work, painted fifteen years later between 1847 and 1849, is located at the Musee Fabre, Montpellier, France. The two works both depict the same scene of four women together in an enclosed room. Despite the similar setting, the two paintings evoke completely different moods through the depiction of the women. Delacroix's earlier 1834 work captures the separation between the women and the viewer. The second painting instead invites the viewer into the scene through the warm inviting gaze of the woman.

Women of Algiers, along with Delacroix's other Orientalist paintings, has inspired many artists of later generations. In 1888 both Vincent van Gogh and Paul Gauguin travelled to Montpellier to view Delacroix's 1849 version of Women of Algiers. The painting served as a source of inspiration to the later impressionists, and a series of 15 paintings and numerous drawings by Pablo Picasso in 1954.

The 1834 painting was first displayed at the 1834 Salon in Paris, where it received mixed reviews. The art critic Gustave Plance wrote in a review for Revue des deux mondes that Delacroix's painting Femmes d'Alger dans leur Appartement was about painting and nothing more, painting that is fresh, vigorous, advanced with spirit, and of an audacity completely venetian, yet yielding nothing to the masters it recalls. King Louis Philippe purchased the painting in 1834 and presented it to the Musée du Luxembourg. In 1874 the painting was moved to the Louvre, Paris where it remains today as part of the permanent collection.

The work depicts four women enclosed in a lavishly decorated room. Three of the women are sumptuously adorned with loose, billowing garments and gold jewellery. One woman has a pink flower in her hair. The fourth woman is a black slave who exits the scene, looking over her left shoulder towards the seated women. Delacroix perfectly rendered the features of the women's clothing, adornments, and the interior decor in great detail. This attention to details follows through from his 1832 Algerian sketches into the 1834 oil painting of the same scene. The painting has been applauded by scholars for its attempted ethnographic depiction, both in the relatively clothed forms of the females and the title of the painting itself, as it is devoid of the objectifying terms odalisque or harem. Delacroix's Women of Algiers does not depict an overtly eroticized version of the Oriental female, as other artists did, such as Jean-Auguste-Dominique Ingres' salacious depiction in his 1814 painting Grande Odalisque.

Although there is a desire for realism to evoke the decorative mood, the work fails to extend the desire for realism to the women themselves, and the social customs of the harem. There is almost no narrative in the stagnant space. The women are cloistered together, not engaging with one another. The challenging stare of the women on the left reflects hostility towards the permeation of the private space. Aside from this glance there is no depiction of the nineteenth century social customs of the harems of elite Algerian culture. Ultimately Delacroix's stolen glance into the Algerian harem provided him with little visual information to create a realistic image.