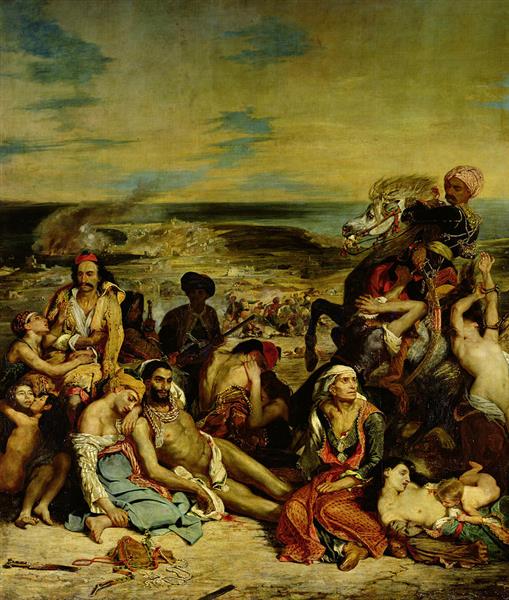 The Massacre at Chios

The Massacre at Chios (French: Scène des massacres de Scio) is the second major oil painting by the French artist Eugène Delacroix. The work is more than four meters tall, and shows some of the horror of the wartime destruction visited on the Island of Chios in the Chios massacre. A frieze-like display of suffering characters, military might, ornate and colourful costumes, terror, disease and death is shown in front of a scene of widespread desolation.


Unusual for a painting of civil ruin during this period, The Massacre at Chios has no heroic figure to counterbalance the crushed victims, and there is little to suggest hope among the ruin and despair. The vigour with which the aggressor is painted, contrasted with the dismal rendition of the victims has drawn comment since the work was first hung, and some critics have charged that Delacroix might have tried to show some sympathy with the brutal occupiers. The painting was completed and displayed at the Salon of 1824 and presently hangs at the Musée du Louvre in Paris.


A military attack on the inhabitants of Chios by Ottoman forces commenced on 11 April 1822 and was prosecuted for several months into the summer of the same year. The campaign resulted in the deaths of twenty thousand citizens, and the forced deportation into slavery of almost all the surviving seventy thousand inhabitants.


Delacroix had been greatly impressed by his fellow Parisien Théodore Géricault's The Raft of the Medusa, a painting for which he himself modeled as the young man at the front with the outstretched arm. The pyramidal arrangement that governs Géricault's painting is similarly seen with the figures in the foreground of The Massacre at Chios. On this unlikely layout of characters, Delacroix commented, "One must fill up; if it is less natural, it will be more beautiful and fécond. Would that everything should hold together!" The dense assembly of characters at the front is in marked contrast to the open and dispersed spaces behind them. Land and sea, light and shade run appear as bands of drifting colours listlessly running into each other, and Delacroix appears to abandon the laws of perspective altogether with his rendering of clouds. The complete effect of this background is to suggest a constant opening out, dissolution and centrelessness. Aesthetician Heinrich Wölfflin identified this technique, and classified it a tectonic form.


The thirteen civilians—men, women and children–have been rounded up for slaughter or enslavement. They are harshly presented to the viewer in an almost flat plane; slumped, disordered, and unevenly distributed. Their arrangement principally comprises two human pyramids–one pyramid to the left of the canvas culminating in the man with the red fez, and the other to the right culminating in the mounted soldier. The area between the two pyramids contains two soldiers in shadow, and two more Greek victims–a young man embraced by a young woman. The two men in the pyramid to the left are injured. The man at the front is on or near to the point of death, and the man poised at the top of the group appears unable to prepare a defence for himself. His gaze is in the direction of the suffering children in front of him, but it does not fall on them. This seeming detachment, coupled with the vacant stare of the dying man lend to this group an air of despondent resignation.