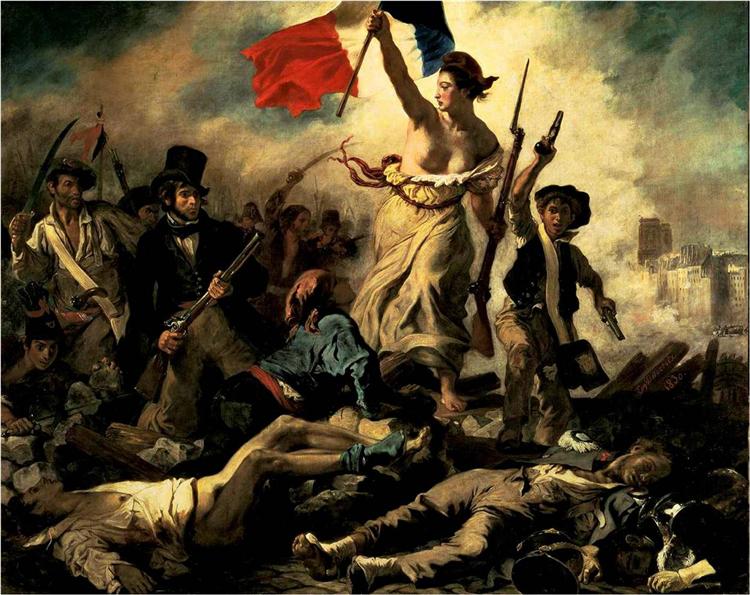 Perhaps Delacroix’s most influential and most recognizable paintings, Liberty Leading the People was created to commemorate the July Revolution of 1830, which removed Charles X of France from power. Delacroix wrote in a letter to his brother that a bad mood that had been hold of him was lifting due to the painting on which he was embarking (the Liberty painting), and that if he could not fight for his country then at least he would paint for it. The French government bought the painting in 1831, with plans to hang it in the room of the new king Louis-Philippe, but it was soon taken down for its revolutionary content. Lady Liberty was eventually the model for the Statue of Liberty, which was given to the United States 50 years later, and has also been featured on the French banknote.

Liberty Leading the People (French: La Liberté guidant le peuple [la libɛʁte ɡidɑ̃ lə pœpl]) is a painting by Eugène Delacroix commemorating the July Revolution of 1830, which toppled King Charles X of France. A woman personifying the concept and the Goddess of Liberty leads the people forward over a barricade and the bodies of the fallen, holding the flag of the French Revolution – the tricolour flag, which remains France's national flag – in one hand and brandishing a bayonetted musket with the other. The figure of Liberty is also viewed as a symbol of France and the French Republic known as Marianne.

By the time Delacroix painted Liberty Leading the People, he was already the acknowledged leader of the Romantic school in French painting. Delacroix, who was born as the Age of Enlightenment was giving way to the ideas and style of romanticism, rejected the emphasis on precise drawing that characterised the academic art of his time, and instead gave a new prominence to freely brushed colour.

Delacroix painted his work in the autumn of 1830. In a letter to his brother dated 21 October, he wrote: "My bad mood is vanishing thanks to hard work. I’ve embarked on a modern subject—a barricade. And if I haven’t fought for my country at least I’ll paint for her." The painting was first exhibited at the official Salon of 1831.

Delacroix depicted Liberty as both an allegorical goddess-figure and a robust woman of the people. The mound of corpses acts as a kind of pedestal from which Liberty strides, barefoot and bare-breasted, out of the canvas and into the space of the viewer. The Phrygian cap she wears had come to symbolize liberty during the first French Revolution, of 1789–94. The painting has been seen as a marker to the end of the Age of Enlightenment, as many scholars see the end of the French Revolution as the start of the romantic era.

The fighters are from a mixture of social classes, ranging from the bourgeoisie represented by the young man in a top hat, a student from the prestigious École Polytechnique wearing the traditional bicorne, to the revolutionary urban worker, as exemplified by the boy holding pistols. What they have in common is the fierceness and determination in their eyes. Aside from the flag held by Liberty, a second, minute tricolore can be discerned in the distance flying from the towers of Notre Dame.

The identity of the man in the top hat has been widely debated. The suggestion that it was a self-portrait by Delacroix has been discounted by modern art historians. In the late 19th century, it was suggested the model was the theatre director Étienne Arago; others have suggested the future curator of the Louvre, Frédéric Villot; but there is no firm consensus on this point.

Several of the figures are probably borrowed from a print by popular artist Nicolas Charlet, a prolific illustrator who Delacroix believed captured, more than anyone else, the peculiar energy of the Parisians.

The French government bought the painting in 1831 for 3,000 francs with the intention of displaying it in the throne room of the Palais du Luxembourg as a reminder to the "citizen-king" Louis-Philippe of the July Revolution, through which he had come to power. This plan did not come to fruition and the canvas hung in the palace's museum gallery for a few months, before being removed due to its inflammatory political message. After the June Rebellion of 1832, it was returned to the artist. According to Albert Boime,