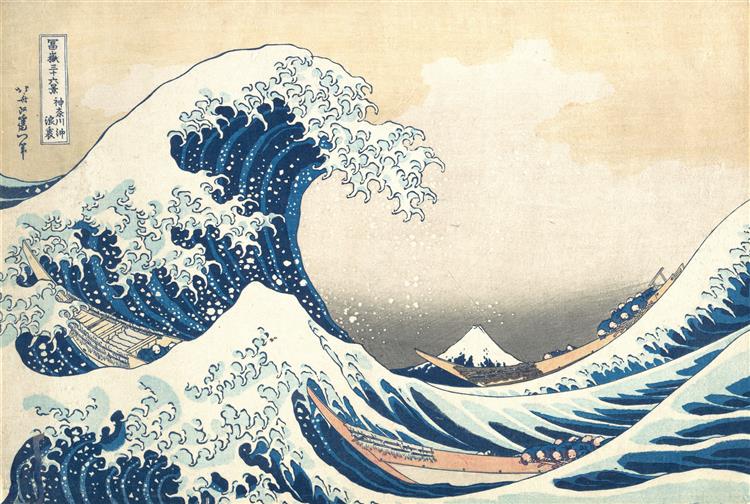 The Great Wave off Kanagawa

This is the most famous print created by Katsushika Hokusai, and it continues to grow in popularity and recognition worldwide. The image is of two boats, full of Japanese sailors, coming up against the namesake of the print, the Great Wave. The wave looks as if it will swallow the boats whole, and that the boat men are sure to be devoured in the wave. Although it is such a strong image, it is simplistically beautiful, with curling blue waves and white frothy tips, which menacingly curl down into points, like claws ready to scoop the sailors out of the sea.

The Great Wave off Kanagawa (神奈川沖浪裏, Kanagawa-oki nami ura, "Under a wave off Kanagawa"), also known as The Great Wave or simply The Wave, is a woodblock print by the Japanese ukiyo-e artist Hokusai. It was published sometime between 1829 and 1833 in the late Edo period as the first print in Hokusai's series Thirty-six Views of Mount Fuji. It is Hokusai's most famous work, and one of the most recognizable works of Japanese art in the world.

The image depicts an enormous wave threatening boats off the coast of the town of Kanagawa (the present-day city of Yokohama, Kanagawa Prefecture). While sometimes assumed to be a tsunami, the wave is more likely to be a large rogue wave. As in many of the prints in the series, it depicts the area around Mount Fuji under particular conditions, and the mountain itself appears in the background.

Impressions of the print are in many Western collections, including the Metropolitan Museum of Art, the British Museum, the Art Institute of Chicago, the Los Angeles County Museum of Art, the National Gallery of Victoria in Melbourne, and in Claude Monet's home in Giverny, France, among many other collections.

Hokusai began painting when he was six years old. At age twelve, his father sent him to work at a booksellers. At sixteen, he was apprenticed as an engraver and spent three years learning the trade. At the same time he began to produce his own illustrations. At eighteen he was accepted as an apprentice to Katsukawa Shunshō, one of the foremost ukiyo-e artists of the time.

In 1804 he became famous as an artist when, during a festival in Tokyo, he completed a 240m² painting of a Buddhist monk named Daruma. In 1814, he published the first of fifteen volumes of sketches entitled Manga. His Thirty-six Views of Mount Fuji, from which The Great Wave comes, was produced from c. 1830.

From the sixteenth century fantastic depictions of waves crashing on rocky shores were painted on folding screens known as "rough seas screens" (ariso byōbu). Hokusai drew many waves throughout his career; the genesis of the Great Wave can be traced back over thirty years. The combination of wave and mountain was inspired by an oil painting by Shiba Kōkan, an artist strongly influenced by the Western art, particularly Dutch paintings, he had seen at Nagasaki, the only port open to foreigners in this period. Kōkan's A View of Seven-League Beach was executed in middle of 1796 and exhibited publicly at the Atago shrine in Shiba. Hokusai's print Springtime at Enoshima, which he contributed to The Willow Branch poetry anthology published in 1797, is clearly derived from Kōkan's work, although the wave in Hokusai's version rises noticeably higher.

Closer compositionally to the Great Wave are two later prints by Hokusai: Kanagawa-oki Honmoku no zu (c. 1803) and Oshiokuri Hato Tsusen no Zu, (c. 1805) Both works have subjects identical to the Great Wave: a sailboat and a rowboat respectively. In both precursor works, the subjects are in the midst of a storm, beneath a great wave that threatens to devour them. An analysis of the differences between the two works and the Great Wave demonstrates the artistic and technical development of Hokusai: