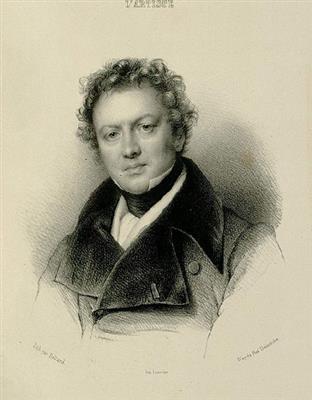 
De Steuben was born the son of the Duke of Württemberg officer Carl Hans Ernst von Steuben. At the age of twelve he moved with his father, who entered Russian service as a captain, to Saint Petersburg, where he studied drawing at the Art Academy classes as a guest student.


Thanks his father's social contacts in the court of the Tsar, in the summer of 1802 he accompanied the young Grand Duchess Maria Pavlovna of Russia (1786–1859) and granddaughter of Frederick II Eugene, Duke of Württemberg, to the Thuringian cultural city of Weimar, where the Tsar's daughter two years later married Charles Frederick, Grand Duke of Saxe-Weimar-Eisenach (1783–1853). Steuben, then fourteen years old, was a Page at the ducal court, a position for which the career prospects would be in the military or administration.


The poet Friedrich Schiller was a family friend who at once recognized De Steuben's artistic talent and instilled in him his political ideal of free self-determination regardless of courtly constraints.


In 1803 Steuben traveled with a letter to his friend, painter François Gérard, in Paris. Gerard took in many penniless aspiring artists and students for training. After two years of preparation, in February 1805 Steuben enrolled in the prestigious École nationale supérieure des Beaux-Arts, where he learned from renowned teachers, including Jacques-Louis David and Pierre-Paul Prud'hon.


While working in a studio, the young art student first met the naturalist Alexander von Humboldt, whose brother Wilhelm von Humboldt was the founder of the University of Berlin. Alexander von Humboldt strongly encouraged the efforts of the Steuben family to establish themselves artistically and economically: in long letters Humboldt repeatedly asked for support for De Steuben, soliciting artistic jobs for him, including from the Prussian Minister Heinrich Friedrich Karl vom und zum Stein and Duchess Helene of Mecklenburg-Schwerin.


De Steuben in 1812 debuted at the Paris Salon with his painting of Peter the Great in the storm on Lake Ladoga, which garnered attention in the professional world. Encouraged by this first success, Steuben continued with a number of historical paintings. In 1820 he married a portrait painter named Eleanor Trollé, whom he had met during his training. At the time of their wedding, the couple already had a son, Joseph Alexander (born 1814).


At the behest of Pierre Fontaine in 1828 de Steuben painted La Clémence de Henri IV après la Bataille d'Ivry, depicting a victorious Henry IV of France at the Battle of Ivry. De Steuben's Bataille de Poitiers, en octobre 732, painted between 1834 and 1837, shows the triumphant Charles Martel at the Battle of Tours, also known as the Battle of Poitiers.


Life in the French capital was a repeated source of internal conflict for Steuben. The allure of bohemian Paris and his military-dominated upbringing made him a wanderer between worlds. As an official commitment to his adopted country he became a French citizen in 1823. However, the irregularity of his income as a freelance artist was in contrast to his sense of duty and social responsibility. To secure his family financially, he took a job as an art teacher at the École Polytechnique, where he briefly trained Gustave Courbet.