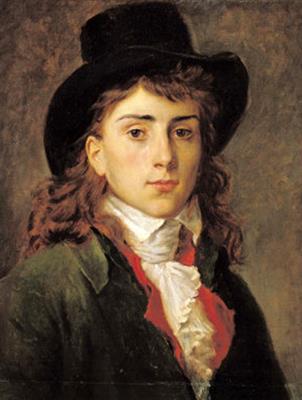 
Gros studied under Jacques-Louis David in Paris and began an independent artistic career during the French Revolution. Forced to leave France, he moved to Genoa and witnessed the nearby Battle of Arcole (1796). Inspired by an event during the battle, he produced a portrait of the French commander, Napoleon Bonaparte, then a newly promoted general. The portrait brought Gros to public attention and gained the patronage of Napoleon.


After travelling with Napoleon's army for several years, he returned to Paris in 1799. Gros produced several large paintings of battles and other events in Napoleon's life. These were mostly in a neoclassical style, but Napoléon on the Battlefield of Eylau adopted a more realistic portrayal of the horrors of war. Gros also painted portraits of officers in the French army and members of French high society. After the fall of Napoleon, he shifted his artistic focus and produced more history paintings, which art historians regard as less impressive than his earlier work.


Born in Paris, Gros began to learn to draw at the age of six from his father, Jean-Antoine Gros, who was a miniature painter, and showed himself as a gifted artist. His mother, Pierrette-Madeleine-Cécile Durand, was also a painter. Towards the close of 1785, Gros, by his own choice, entered the studio of Jacques-Louis David, which he frequented assiduously, continuing at the same time to follow the classes of the Collège Mazarin.


The death of his father, whose circumstances had been embarrassed by the French Revolution, threw Gros upon his own resources in 1791. He now devoted himself wholly to his profession, and he competed (unsuccessfully) in 1792 for the grand prix. Around this time, however, on the recommendation of the École des Beaux Arts, he was employed on the execution of portraits of the members of the National Convention, but disturbed by the development of the Revolution, Gros left France in 1793 for Italy.


He supported himself at Genoa by the same means, producing a great quantity of miniatures and fixés. He visited Florence, but returned to Genoa where he made the acquaintance of Joséphine de Beauharnais. He followed her to Milan, where he was well received by her husband, Napoleon Bonaparte.


On 15 November 1796, Gros was present with the army near Arcola when Bonaparte planted the French tricolor on the bridge. Gros seized on this incident, and showed by his treatment of it (entitled Bonaparte at the pont d'Arcole) that he had found his vocation. Bonaparte at once gave him the post of inspecteur aux revues, which enabled him to follow the army, and in 1797 nominated him to the commission charged with selecting the spoils which should enrich the Louvre.


In 1799, having escaped from the besieged city of Genoa, Gros made his way to Paris, and in the beginning of 1801 took up his quarters in the Capucins. His esquisse of the Battle of Nazareth (now in the Musée de Nantes) gained the prize offered in 1802 by the consuls, but was not carried out, owing it is said to the jealousy of Jean-Andoche Junot felt by Napoleon; but he indemnified Gros by commissioning him to paint his own visit to the pest-house of Jaffa. Les Pestiférés de Jaffa (Louvre) was followed by The Battle of Aboukir, 1806 (Versailles), and The Battle of Eylau, 1808 (Louvre). According to the Encyclopædia Britannica Eleventh Edition, "these three subjects – the popular leader facing the pestilence unmoved, challenging the splendid instant of victory, heart-sick with the bitter cost of a hard-won field – gave Gros his chief title to fame."