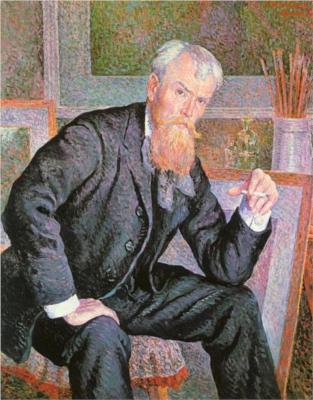 Henri-Edmond Cross, born Henri-Edmond-Joseph Delacroix, (20 May 1856 – 16 May 1910) was a French painter and printmaker. He is most acclaimed as a master of Neo-Impressionism and he played an important role in shaping the second phase of that movement. He was a significant influence on Henri Matisse and many other artists. His work was instrumental in the development of Fauvism.

Henri-Edmond-Joseph Delacroix was born in Douai, a commune in the Nord départment in northern France, on 20 May 1856. He had no surviving siblings. His parents, with a family history of ironmongery, were Alcide Delacroix, a French adventurer, and British Fanny Woollett.

In 1865 the family moved to a location near Lille, a northern French city close to the Belgian border. Alcide's cousin, Dr. Auguste Soins, recognized Henri's artistic talent and was very supportive of his artistic inclinations, even financing the boy's first drawing instructions under painter Carolus-Duran the following year. Henri was Duran's protégé for a year. His studies continued for a short time in Paris in 1875 with François Bonvin before returning to Lille. He studied at the École des Beaux-Arts, and in 1878 he enrolled at the Écoles Académiques de Dessin et d'Architecture, studying for three years in the studio of Alphonse Colas. His art education continued, under fellow Douai artist Émile Dupont-Zipcy, after moving to Paris in 1881.

Cross's early works, portraits and still lifes, were in the dark colors of Realism. In order to distinguish himself from the famous Romantic painter Eugène Delacroix, he changed his name in 1881, shortening and Anglicizing his birth name to "Henri Cross" – the French word croix means cross. 1881 was also the year of his first exhibition at the Salon des Artistes Français. He painted many landscapes on an 1883 trip to the Alpes-Maritimes, accompanied by his family. Dr. Soins, who was also along on the trip, was the subject of a painting that Cross exhibited at Nice's Exposition Universelle later in the year. During the Mediterranean trip, Cross met Paul Signac, who became a close friend and artistic influence.

In 1884 Cross co-founded the Société des Artistes Indépendants, which consisted of artists displeased with the practices of the official Salon, and presented unjuried exhibitions without prizes. There, he met and became friends with many artists involved in the Neo-Impressionist movement, including Georges Seurat, Albert Dubois-Pillet, and Charles Angrand. Despite his association with the Neo-Impressionists, Cross did not adopt their style for many years. His work continued to manifest influences such as Jules Bastien-Lepage and Édouard Manet, as well as the Impressionists. The change from his early, somber, Realist work was gradual. His color palette became lighter, working in the brighter colors of Impressionism. He also worked en plein air. In the latter part of the 1880s, he painted pure landscapes that showed the influence of Claude Monet and Camille Pissarro. In about 1886, again attempting to differentiate himself from another French artist – this time, Henri Cros – he again changed his name, finally adopting "Henri-Edmond Cross".