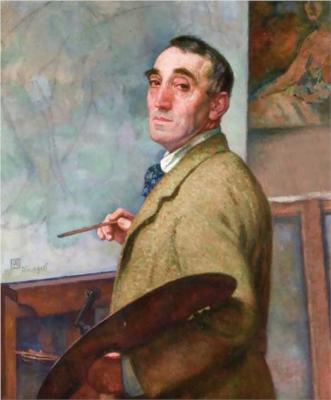 Théophile "Théo" van Rysselberghe (23 November 1862 – 14 December 1926) was a Belgian neo-impressionist painter, who played a pivotal role in the European art scene at the turn of the century.

Born in Ghent to a French-speaking bourgeois family, he studied first at the Academy of Ghent under Theo Canneel and from 1879 at the Académie Royale des Beaux-Arts in Brussels under the directorship of Jean-François Portaels. The North African paintings of Portaels had started an orientalist fashion in Belgium. Their impact would strongly influence the young Théo van Rysselberghe. Between 1882 and 1888 he made three trips to Morocco, staying there a total of one year and half.

Barely 18 years old, he already participated at the Salon of Ghent, showing two portraits. Soon afterwards followed his Self-portrait with pipe (1880), painted in somber colours in the Belgian realistic tradition of that time. His Child in an open spot of the forest (1880) already departs from this style and he sets his first steps towards impressionism. Yet soon he would develop his own realistic style, close to impressionism. In 1881 he exhibited for the first time at the Salon in Brussels.

The next year he travelled (following in the footsteps of Jean-François Portaels) extensively in Spain and Morocco together with his friend Frantz Charlet and the Asturian painter Darío de Regoyos. He especially admired the 'old masters' in the Museo del Prado. In Seville they met Constantin Meunier, who was copying Pedro Campaña's Descent from the Cross. From this Spanish trip stem the following portraits : Spanish woman (1881) and Sevillan woman (1882), already completely different in style. When he set foot in Tanger at the end of October 1882, a whole new world opened up for him: so close to Europe and yet completely different. He would stay there for four months, drawing and painting the picturesque scenes on the street, the kasbah and in the souk: Arabian street cobbler (1882), Arabian boy (1882), Resting guard (1883)

Back in Belgium, he showed about 30 works of his trip at the "Cercle Artistique et Littéraire" in Ghent. It was an instant success, especially The kef smokers, The orange seller and a seascape The strait (setting sun), Tanger (1882).

In April 1883 he exhibited these scenes of everyday Mediterranean life at the salon L'Essor, in Brussels before an enthusiast public. It was also around this time that he befriended the writer and poet Emile Verhaeren, whom he would later portray several times.

In September 1883 van Rysselberghe went to Haarlem to study the light in the works of Frans Hals. The accurate rendering of light would continue to occupy his mind. There he also met the American painter William Merritt Chase.

Théo van Rysselberghe was one of the prominent co-founders of the Belgian artistic circle Les XX on 28 October 1883. This was a circle of young radical artists, under the patronage, as secretary, of the Brussels jurist and art lover Octave Maus (1856–1919). They rebelled against the outmoded academism of that time and the prevailing artistic standards. Among the most notable members were James Ensor, Willy Finch, Fernand Khnopff, Félicien Rops, and later Auguste Rodin and Paul Signac. This membership brought van Rysselberghe in contact with other radical artists, such as James Abbott McNeill Whistler, who had exhibited in Les XX in 1884. His influence as a portrait painter can be seen in van Rysselberghe's portrait of Octave Maus as a dandy (1885). Van Rysselberghe would paint several portraits of Octave Maus and his wife between 1883 and 1890.