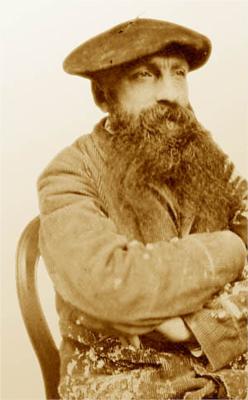 François Auguste René Rodin (12 November 1840 – 17 November 1917), known as Auguste Rodin (/oʊˈɡuːst roʊˈdæ̃/; French: [oɡyst ʁɔdɛ̃]), was a French sculptor. Although Rodin is generally considered the progenitor of modern sculpture, he did not set out to rebel against the past. He was schooled traditionally, took a craftsman-like approach to his work, and desired academic recognition, although he was never accepted into Paris's foremost school of art.

Sculpturally, Rodin possessed a unique ability to model a complex, turbulent, deeply pocketed surface in clay. Many of his most notable sculptures were roundly criticized during his lifetime. They clashed with predominant figurative sculpture traditions, in which works were decorative, formulaic, or highly thematic. Rodin's most original work departed from traditional themes of mythology and allegory, modeled the human body with realism, and celebrated individual character and physicality. Rodin was sensitive to the controversy surrounding his work, but refused to change his style. Successive works brought increasing favor from the government and the artistic community.

From the unexpected realism of his first major figure – inspired by his 1875 trip to Italy – to the unconventional memorials whose commissions he later sought, Rodin's reputation grew, such that he became the preeminent French sculptor of his time. By 1900, he was a world-renowned artist. Wealthy private clients sought Rodin's work after his World's Fair exhibit, and he kept company with a variety of high-profile intellectuals and artists. His students included Antoine Bourdelle, Camille Claudel, Constantin Brâncuși, Charles Despiau. He married his lifelong companion, Rose Beuret, in the last year of both their lives. His sculptures suffered a decline in popularity after his death in 1917, but within a few decades, his legacy solidified. Rodin remains one of the few sculptors widely known outside the visual arts community.

Rodin was born in 1840 into a working-class family in Paris, the second child of Marie Cheffer and Jean-Baptiste Rodin, who was a police department clerk. He was largely self-educated, and began to draw at age ten. Between ages 14 and 17, Rodin attended the Petite École, a school specializing in art and mathematics, where he studied drawing and painting. His drawing teacher, Horace Lecoq de Boisbaudran, believed in first developing the personality of his students so that they observed with their own eyes and drew from their recollections. Rodin still expressed appreciation for his teacher much later in life. It was at Petite École that he first met Jules Dalou and Alphonse Legros.

In 1857, Rodin submitted a clay model of a companion to the École des Beaux-Arts in an attempt to win entrance; he did not succeed, and two further applications were also denied. Given that entrance requirements at the Grande École were not particularly high, the rejections were considerable setbacks. Rodin's inability to gain entrance may have been due to the judges' Neoclassical tastes, while Rodin had been schooled in light, 18th-century sculpture. Leaving the Petite École in 1857, Rodin earned a living as a craftsman and ornamenter for most of the next two decades, producing decorative objects and architectural embellishments.