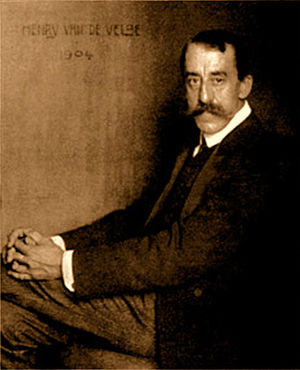 Henry Clemens van de Velde (Dutch: [ɑ̃ˈri vɑndəˈvɛldə]; 3 April 1863 – 15 October 1957) was a Belgian painter, architect, interior designer, and art theorist. Together with Victor Horta and Paul Hankar, he is considered one of the founders of Art Nouveau in Belgium.[2] He worked in Paris with Samuel Bing, the founder of the first gallery of Art Nouveau in Paris. Van de Velde spent the most important part of his career in Germany and became a major figure in the German Jugendstil. He had a decisive influence on German architecture and design at the beginning of the 20th century.


Van de Velde was born in Antwerp, where he studied painting under Charles Verlat at the famous Royal Academy of Fine Arts, Antwerp. He then went on to study with the painter Carolus-Duran in Paris. As a young painter he was strongly influenced by Paul Signac and Georges Seurat and soon adopted a neo-impressionist style, and pointillism. In 1889 he became a member of the Brussels-based artist group "Les XX". After Vincent van Gogh exhibited some work on the yearly exhibition of Les XX van de Velde became one of the first artists to be influenced by the Dutch painter. During this period he developed a lasting friendship with the painter Théo van Rysselberghe and the sculptor Constantin Meunier.


In 1890, van de Velde wrote that "there will be no place in the society of the future for anything which is not of use to everyone."[2]


In 1892, he abandoned painting, devoting his time to the arts of decoration and interior design (silver and goldsmith's trade, chinaware and cutlery, fashion design, carpet and fabric design). His meeting with Maria Sèthe, his future wife, was instrumental in this change. They collaborated on a number of projects together, including designing wallpapers and female clothing. Their first house, Bloemenwerf in Ukkel, was van de Velde's first attempt at architecture and was inspired by the British Arts and Crafts Movement. Its exterior closely resembled the Red House of William Morris. Maria Sèthe designed the garden surrounding the house.


Henry van de Velde also designed interiors and furniture for the influential art gallery "L'Art Nouveau" of Samuel Bing in Paris in 1895. the shop from which Art Nouveau took its name. He participated in Bing's pavilion at the Paris Universal Exposition of 1900 and showed his own work. Van de Velde was strongly influenced by John Ruskin and William Morris's English Arts and Crafts movement[2] and he was one of the first architects or furniture designers to apply curved lines in an abstract style, rather than based on nature.


Van de Velde's design work became known in Germany through periodicals such as Innen-Dekoration. As a result, he received commissions for interior designs in Berlin. Around the turn of the century, he designed Villa Leuring in the Netherlands, and Villa Esche in Chemnitz, two works that show his Art Nouveau style in architecture. He also designed the interior of the Folkwang Museum in Hagen (today the building houses the Karl Ernst Osthaus-Museum) and the Nietzsche Archive in Weimar.