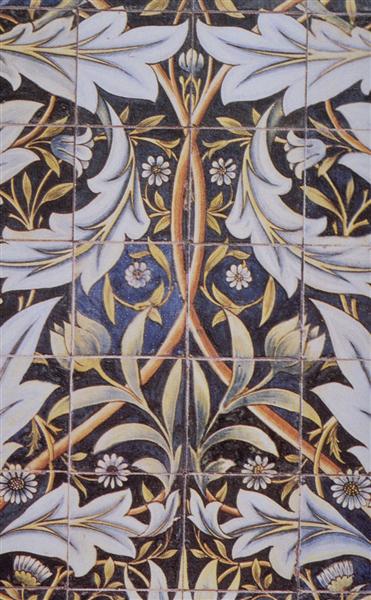 The Arts and Crafts movement was an international movement in the decorative and fine arts that began in Britain and flourished in Europe and North America between about 1880 and 1920, emerging in Japan in the 1920s. It stood for traditional craftsmanship using simple forms, and often used medieval, romantic, or folk styles of decoration. It advocated economic and social reform and was essentially anti-industrial. It had a strong influence on the arts in Europe until it was displaced by Modernism in the 1930s, and its influence continued among craft makers, designers, and town planners long afterwards.

The term was first used by T. J. Cobden-Sanderson at a meeting of the Arts and Crafts Exhibition Society in 1887, although the principles and style on which it was based had been developing in England for at least twenty years. It was inspired by the ideas of architect Augustus Pugin, writer John Ruskin, and designer William Morris.

The movement developed earliest and most fully in the British Isles, and spread across the British Empire and to the rest of Europe and North America. It was largely a reaction against the perceived impoverished state of the decorative arts at the time and the conditions in which they were produced.

The Arts and Crafts movement emerged from the attempt to reform design and decoration in mid 19th century Britain. It was a reaction against a perceived decline in standards that the reformers associated with machinery and factory production. Their critique was sharpened by the items they saw in the Great Exhibition of 1851, which they considered to be excessively ornate, artificial and ignorant of the qualities of the materials used.

The art historian Nikolaus Pevsner has said that exhibits in the Great Exhibition showed "ignorance of that basic need in creating patterns, the integrity of the surface" and "vulgarity in detail". Design reform began with the organisers of the Exhibition itself, Henry Cole (1808–1882), Owen Jones (1809–1874), Matthew Digby Wyatt (1820–1877) and Richard Redgrave (1804–1888), who deprecated excessive ornament and impractical and badly made things. The organisers were "unanimous in their condemnation of the exhibits." Owen Jones, for example, complained that "the architect, the upholsterer, the paper-stainer, the weaver, the calico-printer, and the potter" produce "in art novelty without beauty, or beauty without intelligence." From these criticisms of the contemporary state of manufactured goods emerged several publications which set out what the writers considered to be the correct principles of design. Richard Redgrave's Supplementary Report on Design (1852) analysed the principles of design and ornament and pleaded for "more logic in the application of decoration." Other works followed in a similar vein: Wyatt's Industrial Arts of the Nineteenth Century (1853), Gottfried Semper's Wissenschaft, Industrie und Kunst ("Science, Industry and Art") (1852), Ralph Wornum's Analysis of Ornament (1856), Redgrave's Manual of Design (1876) and Jones's Grammar of Ornament (1856). The Grammar of Ornament was particularly influential, liberally distributed as a student prize and running into nine reprints by 1910.

Jones declared that "Ornament ... must be secondary to the thing decorated", that there must be "fitness in the ornament to the thing ornamented", and that wallpapers and carpets must not have any patterns "suggestive of anything but a level or plain". Where a fabric or wallpaper in the Great Exhibition might be decorated with a natural motif made to look as real as possible, these writers advocated flat and simplified natural motifs. Redgrave insisted that "style" demanded sound construction before ornamentation, and a proper awareness of the quality of materials used. "Utility must have precedence over ornamentation."