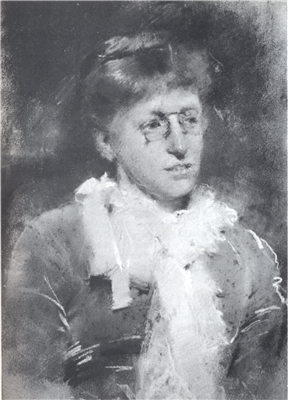 
She was born in Kingstown (now Dún Laoghaire) in County Dublin, and raised in Dungarvan, County Waterford. She was one of the numerous children of Benjamin Purser, a prosperous flour miller and brewer, and his wife Anne Mallet. She was related to Sir Frederic W. Burton, RHA (1816-1900), who was a son of Hannah Mallet. The Purser family had come to Ireland from Gloucestershire in the eighteenth century. Two of her brothers, John and Louis, became professors at Trinity College Dublin. Her niece Olive Purser, daughter of her brother Alfred, was the first woman scholar in TCD.


Until her death she lived for many years in Mespil House, a Georgian mansion with beautiful plaster ceilings on Mespil Road, on the banks of the Grand Canal. Here she was "at home" every Tuesday afternoon to Dublin's writers and artists; her afternoon parties were a fixture of Dublin literary life. Mespil House was demolished after she died and developed into apartments. She was buried in Mount Jerome Cemetery beside her brothers John and Louis.


At thirteen she attended the Moravian school, Institution Evangélique de Montmirail, Switzerland where she learnt to speak fluent French and began painting. In 1873 her father's business failed and she decided to become a full-time painter. She attended classes at the Dublin Metropolitan School of Art. She joined the Dublin Sketching Club, where she was later appointed an honorary member. In 1874 she distinguished herself in the National Competition. In 1878 she again contributed to the RHA, and for the next fifty years became a regular exhibitor, mainly portraits, and showed an average of three works per show.


In 1878-79, she studied at the Académie Julian in Paris where she met the german painter Louise Catherine Breslau with whom she became a lifelong friend.


Sarah Purser became wealthy through astute investments, particularly in Guinness, for which several of her male relatives had worked over the years. She was very active in the art world in Dublin and was involved in the setting up of the Hugh Lane Municipal Gallery, persuading the Irish government to provide Charlemont House in Parnell Square to house the gallery.


She was the second woman to sit on the Board of Governors and Guardians, National Gallery of Ireland, 1914-1943.


In 1924 she initiated the movement for the launching of the Friends of the National Collection of Ireland.


Archives relating to Sarah Purser are housed in the Centre for the Study of Irish Art, National Gallery of Ireland.


She worked mostly as a portraitist. Through her talent and energy, and owing to her friendship with the Gore-Booths, she was very successful in obtaining commissions, famously commenting


When the Viceroy of Ireland commissioned her to portray his children in 1888 his choice reflected her position as the country's foremost portraitist.