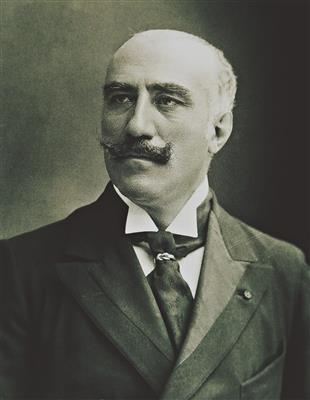 Impressionist painter and artist. A student of Léon Bonnat, Béraud gained notice with his controversial depictions of Biblical characters intertwined into every day Parisian life before turning his concentration to portraits. His paintings where often described as humorous and at times seen as unsuitable satire. Much of his work documents the social history of 19th century Paris and can be considered part of the naturalist movement. His "On the Way Back from the Funeral," gave him his first notable recognition in 1876. He received the National Order of the Legion of Honour in 1887 and a gold medal at the 1889 World's Fair in Paris. Never married, he died at the age of 86.

Jean Béraud (French: [beʁo]; January 12, 1848 – October 4, 1935) was a French painter renowned for his numerous paintings depicting the life of Paris, and the nightlife of Paris society. Pictures of the Champs Elysees, cafés, Montmartre and the banks of the Seine are precisely detailed illustrations of everyday Parisian life during the "Belle Époque". He also painted religious subjects in a contemporary setting.


Béraud was born in Saint Petersburg. His father (also called Jean) was a sculptor and was likely working on the site of St. Isaac's Cathedral at the time of his son's birth. Béraud's mother was one Geneviève Eugénie Jacquin; following the death of Béraud's father, the family moved to Paris. Béraud was in the process of being educated as a lawyer until the occupation of Paris during the Franco-Prussian war in 1870.


Béraud became a student of Léon Bonnat, and exhibited his paintings at the Salon for the first time in 1872. However, he did not gain recognition until 1876, with his On the Way Back from the Funeral. He exhibited with the Society of French Watercolorists at the 1889 World's Fair in Paris.


He painted many scenes of Parisian daily life during the Belle Époque in a style that stands somewhere between the academic art of the Salon and that of the Impressionists. He received the Légion d'honneur in 1894.


Béraud's paintings often included truth-based humour and mockery of late 19th-century Parisian life, along with frequent appearances of biblical characters in then contemporary situations. Paintings such as Mary Magdalene in the House of the Pharisees aroused controversy when exhibited, because of these themes.


Towards the end of the 19th century, Béraud dedicated less time to his own painting but worked on numerous exhibition committees, including the Salon de la Société Nationale. Béraud never married and had no children. He died in Paris on October 4, 1935, and is buried in Montparnasse Cemetery beside his mother.


In France, Béraud was popular, in particular, liked by Guy de Maupassant who called him "adorable's adversaries" (Le plus charmant des fantaisistes).


However, his work is completely ignored by art historians of the period. After the Revolution, Russian artists received Béraud's work with irony, seeing them as the embodiment of the Western commercial consumption, indulging in their opinion, in the rich middle-class tastes.
Painting style gradually shifted from academic towards impressionism. However, while the major Impressionists fled the chaotic Paris and painted landscapes of the surrounding areas, Béraud - like his friend Édouard Manet (1832-1883), and in some of their paintings, Edgar Degas (1834-1917), depicted the urban life. Artistic techniques used by Béraud, in particular, when drawing the so-called À la salle Graffard, later became a classic. The upper part of the picture is hidden in a light haze, the musicians and spectators are depicted in the foreground, while performers stand out against a darker background.