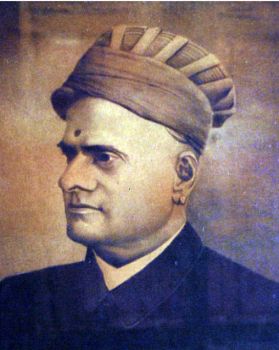 Raja Ravi Varma (29 April 1848 – 2 October 1906) was a celebrated Malayali Indian painter and artist. He is considered among the greatest painters in the history of Indian art for a number of aesthetic and broader social reasons. Firstly, his works are held to be among the best examples of the fusion of European techniques with a purely Indian sensibility. While continuing the tradition and aesthetics of Indian art, his paintings employed the latest European academic art techniques of the day. Secondly, he was notable for making affordable lithographs of his paintings available to the public, which greatly enhanced his reach and influence as a painter and public figure. Indeed, his lithographs increased the involvement of common people with fine arts and defined artistic tastes among common people for several decades. In particular, his depictions of Hindu deities and episodes from the epics and Puranas have received profound acceptance from the public and are found, often as objects of worship, across the length and breadth of India.

Raja Ravi Varma was born M. R. Ry. Ravi Varma, Koil Thampuran of Kilimanoor at Kilimanoor palace in the erstwhile princely state of Travancore (present-day Kerala) into an aristocratic family that for over 200 years produced consorts for the princesses of the matrilineal Travancore royal family. The title Raja was conferred as a personal title by the Viceroy and Governor-General of India.

Ravi Varma was the son of Ezhumavil Neelakanthan Bhattatiripad and Umayamba Thampurratti. His mother Uma Ambabayi Thampuratty (or Umayamba Bayi Thampuratty) belonged to the baronial family which ruled the Kilimanoor feudal estate within the kingdom of Travancore. She was a poet and writer of some talent, and her work Parvati Swayamvaram was published by Varma after her death. Ravi Varma's father was a scholar of Sanskrit and Ayurveda and hailed from the Ernakulam district in Kerala. Ravi Varma had three siblings, a sister named Mangala Bayi and two brothers named Goda Varma (born 1854) and Raja Varma (born 1860). The last-named was also a painter and worked closely with Ravi Varma all his life.

In 1866, at the age of 18, Varma was married to 12-year-old Bhageerthi Bayi (known formally as Pooruruttati Nal Bhageerathi Bayi Thampuratty) of the royal house of Mavelikkara, another major fief of Travancore kingdom. Notably, the house of Mavellikara was a branch of the Royal House of Travancore. Bhageerthi was the youngest of three sisters, and both of her elder sisters had been adopted into the royal family of Travancore in 1857 in order to carry on the lineage. They were known as the Senior and Junior Rani of Attingal, and in their progeny was vested the succession to the throne of Travancore. Therefore, Ravi Varma's connection to the royal family became very close due to his marriage with Bhageerthi. Indeed, his children (because they belonged to their mother's family) would be royal by birth. The marriage, which was arranged by the parents in the proper Indian manner, was harmonious and successful. The couple were blessed with five children, two sons and three daughters. Their elder son, Kerala Varma (b.1876) was of an excessively spiritual temperament. He never married and eventually renounced the world, leaving home for good in 1912. The younger son, Rama Varma (born 1879), inherited his father's artistic talent and studied at the JJ School of Arts, Mumbai. He was married to Gowri Kunjamma, sister of Dewan PGN Unnithan, and became the father of seven children.