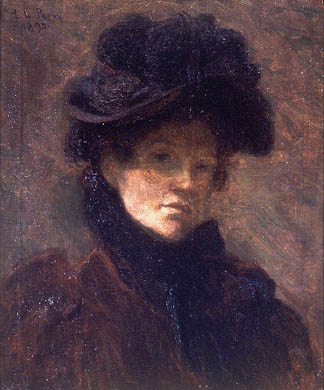 Lilla Cabot Perry (January 13, 1848 – February 28, 1933) was an American artist who worked in the American Impressionist style, rendering portraits and landscapes in the free form manner of her mentor, Claude Monet. Perry was an early advocate of the French Impressionist style and contributed to its reception in the United States. Perry's early work was shaped by her exposure to the Boston School of artists and her travels in Europe and Japan. She was also greatly influenced by Ralph Waldo Emerson's philosophies and her friendship with Camille Pissarro. Although it was not until the age of thirty-six that Perry received formal training, her work with artists of the Impressionist, Realist, Symbolist, and German Social Realist movements greatly affected the style of her oeuvre.

Lydia (Lilla) Cabot was born January 13, 1848 in Boston, Massachusetts. Her father was Dr. Samuel Cabot III, a distinguished surgeon. Her mother was Hannah Lowell Jackson Cabot. She was the eldest of eight children, three being, Samuel Cabot IV (b. 1850), chemist and founder of Valspar's Cabot Stains, Dr. Arthur Tracy Cabot (b. 1852), a progressive surgeon, and Godfrey Lowell Cabot (b. 1861), founder of Cabot Corporation. Her family was prominent in Boston society, and friends of the family included Louisa May Alcott, Ralph Waldo Emerson, and James Russell Lowell, who was her mother's cousin who respected Lilla's independent spirit, "scorn of ignoble things", and "alert nature". Lowell's daughter and Lilla's cousin, Mabel, was a close companion. Perry recalled having the opportunity to play the game "fox and geese" with both Emerson and Alcott. She had lending privileges at the Boston Athenæum, through her father, who was a proprieter, and her mother's family.

Perry studied literature, language, poetry, music and had informal sketching sessions with her friends. As a child she additionally enjoyed reading books and playing sports outdoors. Perry was thirteen years old when the Civil War began. Her parents were ardent abolitionists and took an active role in the war effort by providing care to wounded soldiers and helping to protect runaway slaves. At seventeen, when the Civil War ended, Perry moved with her family to a farm in Canton, Massachusetts where much of her early interests in landscapes and nature was shaped. She traveled with her parents in 1867 to Europe, where she studied painting.

On April 9, 1874, she married Thomas Sergeant Perry, a Harvard alumnus scholar and linguist. His granduncle was Matthew C. Perry, Commodore of the United States Navy. The couple had three daughters: Margaret (1876), Edith (1880), and Alice (1884).

She completed what is considered to be her earliest known painting, Portrait of an Infant (Margaret Perry) dating from 1877–78. This work draws on the inspiration that would occupy much of her artwork throughout her career – her children.

In 1884 Perry began her formal artistic training with the portrait painter Alfred Quinton Collins. Collins had studied at the Académie Julian in Paris under the guidance of Léon Bonnat. Perry’s The Beginner, c. 1885–86, represents the first work she completed under formal guidance. The Beginner echoes Collins’ influences with the sitter’s serious gaze, dark background, and emphasis on dramatic lighting.