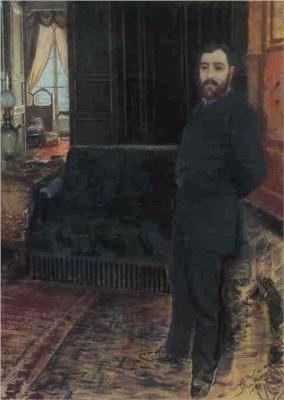 Giuseppe De Nittis (February 25, 1846 – August 21, 1884) was one of the most important Italian painters of the 19th century, whose work merges the styles of Salon art and Impressionism.

De Nittis was born in Barletta, in the region of Apulia, where he first studied under Giovanni Battista Calò. After being expelled in 1863 from the Instituto di Belle Arti in Naples for insubordination, he launched his career with the exhibition of two paintings at the 1864 Neapolitan Promotrice. De Nittis came into contact with some of the artists known as the Macchiaioli, becoming friends with Telemaco Signorini, and exhibiting in Florence.

In 1867 he moved to Paris and entered into a contract with the art dealer Adolphe Goupil which called for him to produce saleable genre works. After gaining some visibility by exhibiting at the Salon he returned to Italy where, now free to paint from nature, he produced several views of Vesuvius.

In 1872 De Nittis returned to Paris and, no longer under contract to Goupil, achieved a success at the Salon with his painting Che freddo! (Freezing!) of 1874 (Private collection). In that same year he was invited to exhibit at the first Impressionist exhibition, held at Nadar's. The invitation came from Edgar Degas, who was a friend of several Italian artists residing in Paris, including Telemaco Signorini, Giovanni Boldini and Federico Zandomeneghi. De Nittis was not accepted by all of the Impressionists, and did not participate in their subsequent exhibitions.

A trip to London resulted in a number of Impressionistic paintings. In 1875 De Nittis took up pastels, which became an important medium for him in his remaining years and which he helped popularize. Back in Paris, where his home was a favorite gathering place for Parisian writers and artists, as well as expatriate Italians, he executed pastel portraits of sitters including De Goncourt, Zola, Manet and Duranty. He preferred pastels as the medium for his largest works, such as the triptych entitled Races at Auteuil (1881).

De Nittis exhibited twelve paintings in the Exposition Universelle of 1878, and was awarded a gold medal. In that same year he received the Légion d’honneur.

In 1884, at the age of 38, De Nittis died suddenly of a stroke at Saint-Germain-en-Laye. His wife, the Parisian Léontine Lucile Gruvelle (married in 1869) donated his paintings to the town of Barletta and are now gathered in the Pinacoteca De Nittis in the Palace of the Marra in the hometown of the painter.

Works by De Nittis are in many public collections, including the Musée d'Orsay in Paris, British Museum in London, and the Metropolitan Museum of Art in New York. His paintings Return from the Races and The Connoisseurs are in the Philadelphia Museum of Art.