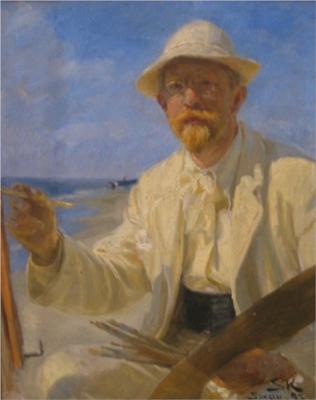 Krøyer was born in Stavanger, Norway, on 23 July 1851 to Ellen Cecilie Gjesdal. He was raised by Gjesdal's sister, Bertha Cecilie (born 1817) and brother-in-law, the Danish zoologist Henrik Nikolai Krøyer, after his mother was judged unfit to care for him. Krøyer moved to Copenhagen to live with his foster parents soon afterward. Having begun his art education at the age of nine under private tutelage, he was enrolled in Copenhagen's Technical Institute the following year.

In 1870 at the age of 19 Krøyer completed his studies at the Royal Danish Academy of Art (Det Kongelige Danske Kunstakademi), where he had studied with Frederik Vermehren. In 1873 he was awarded the gold medal, as well as a scholarship.

In 1874 Heinrich Hirschsprung bought his first painting from Krøyer, establishing a long-standing patronage. Hirschsprung's collection of art forms the basis of the Hirschsprung Museum in Copenhagen.

Between 1877 and 1881, Krøyer travelled extensively in Europe, meeting artists, studying art, and developing his skills and outlook. He stayed in Paris and studied under Léon Bonnat, and undoubtedly came under the influence of contemporary impressionists – Claude Monet, Alfred Sisley, Edgar Degas, Pierre-Auguste Renoir and Édouard Manet.

He continued to travel throughout his life, constantly drawing inspiration from foreign artists and cultures. Hirschsprung provided financial support during the early travels, and Krøyer continued exhibiting in Denmark throughout this period.

In 1882 he returned to Denmark. He spent June–October at Skagen, then a remote fishing village on the northern tip of Denmark, painting themes from local life, as well as depictions of the artistic community there. He would continue to be associated with the developing art and literary scene at Skagen. Other artists at Skagen included writers Holger Drachmann, Georg Brandes and Henrik Pontoppidan, and artists Michael Ancher and Anna Ancher.

Krøyer divided his time between rented houses in Skagen during the summer, a winter apartment in Copenhagen where he worked on his large commissioned portraits, and travel outside of the country.

On a trip to Paris in 1888 he ran into Marie Martha Mathilde Triepcke, whom he had known in Copenhagen. They fell in love and, after a whirlwind romance, married on 23 July 1889 at her parents' home in Germany. Marie Krøyer, who was also a painter, became associated with the Skagen community, and after their marriage was often featured in Krøyer's paintings. The couple had one child, a daughter named Vibeke, born in January 1895. They were divorced in 1905 following a prolonged separation.

Krøyer's eyesight failed him gradually over the last ten years of his life until he was totally blind. Ever the optimist, he painted almost to the end, in spite of health obstacles. In fact, he painted some of his last masterpieces while half-blind, joking that the eyesight in his one working eye had become better with the loss of the other eye.