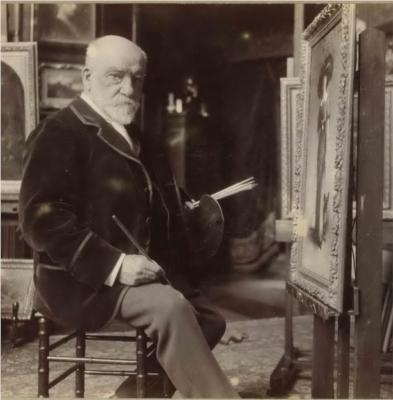 Bonnat was born in Bayonne, but from 1846 to 1853 he lived in Madrid, where his father owned a bookshop. While tending his father's shop, he copied engravings of works by the Old Masters, developing a passion for drawing. In Madrid he received his artistic training under Madrazo. He later worked in Paris, where he became known as a leading portraitist, never without a commission. His many portraits show the influence of Velázquez, Jusepe de Ribera and other Spanish masters, as well as Titian and Van Dyke, whose works he studied in the Prado. Following the period in Spain Bonnat worked the ateliers of the history painters Paul Delaroche and Leon Cogniet (1854) in Paris. Despite repeated attempts, he failed to win the prix de Rome, finally receiving only a second prize. However, a scholarship from his native Bayonne allowed him to spend three years in Rome (1858–60) independently. During his stay in Rome, he became friends with Edgar Degas, Gustave Moreau, Jean-Jacques Henner and the sculptor Henri Chapu.

Bonnat won a medal of honor in Paris in 1869, going on to become one of the leading artists of his day. Bonnat went on to win the Grand Officer of the Légion d'honneur and became a professor at the Ecole des Beaux Arts in 1882. Bonnat was quite popular with American students in Paris. In addition to his native French, he spoke Spanish and Italian and knew English well, to the relief of many monolingual Americans. In May 1905 he succeeded Paul Dubois as director of the Ecole des Beaux-Arts. Julius Kaplan characterised Bonnat as "a liberal teacher who stressed simplicity in art above high academic finish, as well as overall effect rather than detail." Bonnat's emphasis on overall effect on the one hand, and rigorous drawing on the other, put him in a middle position with respect to the Impressionists and academic painters like his friend Jean-Léon Gérôme. In 1917, Bonnat was elected into the National Academy of Design as an Honorary Corresponding member.

Bonnat's vivid portraits of contemporary celebrities are his most characteristic works, but his most important works are arguably his powerful religious paintings, such as his Christ on the Cross (now in the collection of the Musée du Petit Palais in Paris, but not currently on display), Job (in the Musée Bonnat), St Vincent Taking the Place of Two Galley Slaves (at the church of Saint-Nicholas des Champs in Paris), and the large Martyrdom of St Denis for the Pantheon in Paris. However, he received few commissions for religious and historical paintings, and most of his output consists of portraits. He also produced genre paintings of Italian peasants, and a small number of Orientalist scenes.

The writers Émile Zola and Théophile Gautier were among Bonnat's supporters. Gautier hailed him as "the antithesis of Bouguereau," because of the stark naturalism and lack of surface finish that characterize Bonnat's work. Bonnat is an academic painter. He was a member of the Institute, one of the only 14 painters who had administrative power over the Academy des Beaux Arts and thereby the Ecole des Beaux Arts. He had friends and connections among the independent artists of his time as well, such as Edgar Degas, whom he met during his stay in Rome and who painted two portraits of Bonnat, and Édouard Manet, who shared his predilection for Spanish painting. He taught together with Pierre Puvis de Chavannes in the private atelier he ran before becoming professor at the École. He supported Auguste Rodin's candidacy for the Institut, and defended Gustave Courbet's submissions to the salon.