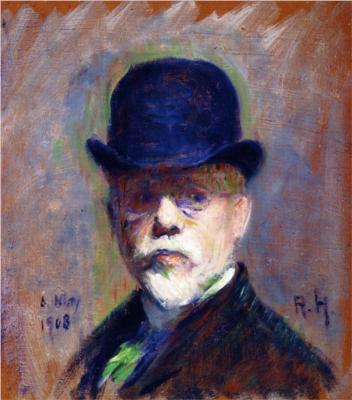 Robert Harris CMG (18 September 1849 – 27 February 1919) was a Welsh-born Canadian painter most noted for his portrait of the Fathers of Confederation.

Born in Caerhun, Conwy, Wales, he came to Prince Edward Island via Liverpool with his family as a youth. He later studied art in Boston, London's Slade School of Art, in Paris under Léon Bonnat, and in Rome. He traveled extensively, finally settling in Montreal.

His commission to paint the Fathers of Confederation came early in his career (1883) and it established his reputation as a portrait artist.

He was later commissioned by news publications of the day to create portraits of notable personalities, ranging from politicians to scoundrels. For example, he made portraits of those accused of murdering the Donnelley's for the Toronto Globe. He was a founding member of the Royal Canadian Academy of Arts (RCA) and elected president of the RCA in 1893. An important collection of his works is housed at the Confederation Centre of the Arts in Charlottetown.

His painting, A Meeting of the School Trustees illustrating a confrontation between PEI teacher Kate Henderson and her school's trustees appeared on a Canadian stamp in 1980 and was dramatised by a Heritage Minute.

He was married but had no children. He was the brother of the architect William Critchlow Harris and took an active interest in the artwork of his cousin Kathleen Morris.