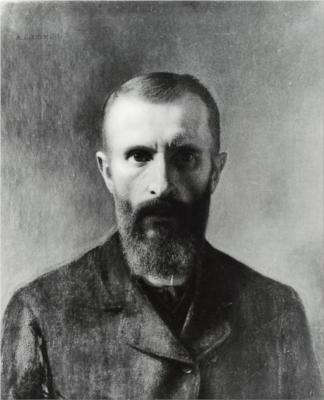 Aleksander Gierymski completed Secondary State School nr III in Warsaw in 1867, and in the same year commenced drawing studies in Warsaw. Between 1868 – 1872 he studied at the Academy of Fine Arts in Munich and graduated with a gold medal. He received a commendation for his diploma work The Merchant of Venice. Between 1873-1874 he stayed in Italy, mostly in Rome. There he completed his first famous works: Roman Inn and Morra Game, which Gierymski brought to Warsaw in the beginning of 1875 and exhibited at Zachęta Gallery. Both paintings received the attention of audiences and critics.

From late 1875 until 1879 the artist returned to Rome, where he worked to improve his work, particularly spending much time studying Italian paintings. The most important work of the Roman period was his painting In the Gazebo. It was an approach to impressionism, which was preceded by extensive studies in this area (for example Cylinder on a table, Man in red tail-coat among others). In the painting In the Gazebo we can see the scene of an 18th-century social gathering, which takes place in a gazebo filled with light from behind. Such scenes allowed him to play witch colours and light. Gierymski's work can be compared to contemporary French impressionists, even though he had not yet been in Paris and there was no evidence that he had seen their work.

The greatest period for Gierymski was between years 1879 -1888 which he spent in Warsaw. In this time he worked with a group of young positivist writers and painters, clustered around the periodical Wędrowiec (Eng. Wanderer). Responsible for art affairs in these magazine was Stanisław Witkiewicz, who took up a battle for Gierymski's public recognition. Paintings, which Gierymski made in this period, for example Jewish women selling oranges; The Old Town Gate, Solec’s Marina, Feast of Trumpets and Sandblasters and others are based on the lives of poor people from two districts in Warsaw – Powiśle and Old Town. Unfortunately his works were never understood and respected in contemporary Poland. As other unappreciated persons in his motherland, without livelihoods, he left Warsaw behind and went abroad in 1888.

Since then he was mostly in Germany and France. Changed surroundings changed his works. Away from his homeland he started to paint less personal subjects. Mostly he was painting landscapes (Kufstein Castel Outlook, Part of Rothenburg, sea landscapes). Frequently he was painting at night, which allowed him to paint objects under artificial light, such as (Munich nocturnes, Paris Opera at Night, Twilight over Seine).

He came back to Poland in 1893 and stayed till 1895, in order to apply for a position at the Academy of Fine Arts in Cracow. This journey revived his interest in human subjects. As the result of this interest we can count for example the painting Peasant's Coffin.

For the last years of his life he remained in Italy. From that latter period came works like Interior of Basilica of San Marco in Venice, Piazza del Popolo in Rome or outlooks of Verona.