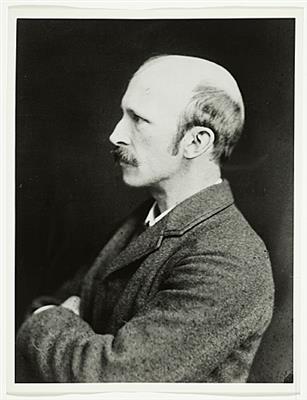 Abbott Handerson Thayer (August 12, 1849 – May 29, 1921) was an American artist, naturalist and teacher. As a painter of portraits, figures, animals and landscapes, he enjoyed a certain prominence during his lifetime, and his paintings are represented in the major American art collections. He is perhaps best known for his 'angel' paintings, some of which use his children as models.

During the last third of his life, he worked together with his son, Gerald Handerson Thayer, on a book about protective coloration in nature, titled Concealing-Coloration in the Animal Kingdom. First published by Macmillan in 1909, then reissued in 1918, it may have had an effect on military camouflage during World War I. However it was roundly mocked by Theodore Roosevelt and others for its assumption that all animal coloration is cryptic.

Thayer also influenced American art through his efforts as a teacher, training apprentices in his New Hampshire studio.

Thayer was born in Boston to William Henry Thayer and Ellen Handerson. The son of a country doctor, he spent his childhood in rural New Hampshire, near Keene, at the foot of Mount Monadnock. In that rural setting, he became an amateur naturalist (in his own words, he was "bird crazy"), a hunter and a trapper. Thayer closely studied Audubon's Birds of America, experimented with taxidermy, and made his first artworks: watercolor paintings of animals.

At the age of fifteen he was sent to the Chauncy Hall School in Boston, where he met Henry D. Morse, an amateur artist who painted animals. With guidance from Morse, Abbott developed and improved his painting skills, focusing on depictions of birds and other wildlife, and soon began painting animal portraits on commission. He also taught his sister, Ellen Thayer Fisher, techniques that he was learning.

At age 18, he relocated to Brooklyn, New York, to study painting at the Brooklyn Art School and the National Academy of Design. studying under Lemuel Wilmarth. He met many emerging and progressive artists during this period in New York, including his future wife, Kate Bloede and his close friend, Daniel Chester French. He showed work at the newly formed Society of American Artists, and continued refining his skills as an animal and landscape painter. In 1875, after having married Kate Bloede, he moved to Paris, where he studied for four years at the École des Beaux-Arts, with Henri Lehmann and Jean-Léon Gérôme, and where his closest friend became the American artist George de Forest Brush. Returning to New York, he established his own portrait studio (which he shared with Daniel Chester French), became active in the Society of American Painters, and began to take in apprentices.

Life became all but unbearable for Thayer and his wife during the early 1880s, when two of their small children died unexpectedly, just one year apart. Emotionally devastated, they spent the next several years relocating from place to place. Although he was not yet secure financially, Thayer's growing reputation resulted in more portrait commissions than he could accept. Among his sitters were George Washington Cable, Mark Twain, and Henry James. He also made numerous portraits of the three remaining Thayer children, Mary, Gerald, and Gladys, and used them as models for symbolic compositions such as Angel (1887) and Virgin Enthroned (1891).