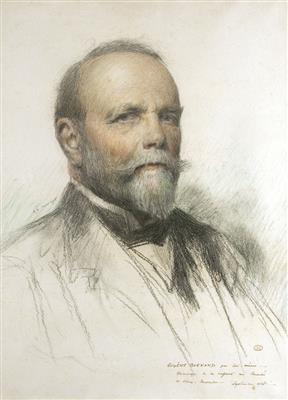 Eugène Burnand (30 August 1850 – 4 February 1921) was a prolific Swiss painter and illustrator from Moudon, Switzerland. Born of prosperous parents who taught him to appreciate art and the countryside, he first trained as an architect but quickly realised his vocation was painting. He studied art in Geneva and Paris then settled in Versailles. In the course of his life he travelled widely and lived at various times in Florence, Montpellier, Seppey (Moudon) and Neuchâtel. His later years were spent in Paris where he died a celebrated and well respected artist both in Switzerland and France. He was primarily a realist painter of nature. Most of his works were of rural scenes, often with animals, the depiction of which he was a master. He increasingly painted human figures and by the end of his career could be called a portraitist whose skill revealing character was profound.

A deeply religious man, his Protestant beliefs led him to include more religious works that he put his stamp of realism on, and he became best known in Europe for his illustrations of "The Parables", that was published in French, German and English versions over four decades. His works are now widely distributed in museums and private collections throughout the world and in his own dedicated museum in Moudon. His final project was a series of 104 pastel portraits of allied WW1 participants of all nationalities that was incomplete when he died; a unique body of work that was subsequently published as a book in 1922 and recently republished in 2010.

Eugene Burnand was a good living family man who kept detailed records of his life and work that facilitate a thorough understanding of his methods and motives. He, his wife Julia and family of eight children, including two sets of twins, moved with him as his work took him around France and Switzerland. His traditional style ensured a conventional appreciation that he and his family enjoyed, but brought some criticism and conflict with contemporaries who were embracing modern art. Burnand was greatly influenced by artists such as Jean-François Millet and Gustave Courbet. This is reflected in perhaps his best known work, The Disciples Peter and John Running to the Sepulchre on the Morning of the Resurrection 1898, which hangs in the Musée d'Orsay in Paris.

He was born on 30 August 1850 in Chateau Billens, the property of his grandfather Charles Burnand, in Moudon, Vaud, Switzerland, a French speaking region north of Lausanne. His parents, (Colonel) Ėdouard Burnand and Henriette (née Foltz) were part of the Protestant bourgeois establishment of the town. His father was a forestry inspector who travelled considerably, invented the Prélaz-Burnand rifle in 1859 and had "the gifts and temperament of an artist, and drew and painted all his life as an amateur".

Eugène was the youngest of three surviving children. His older brothers had already left home when he was born and were working in France. The family soon moved to Chateau Carouge in the Moudon Ville Haute. Both his parents were well educated and cultured and he had a mature relationship with them. He travelled often with his father throughout the Canton of Vaud in the course of his work and this instilled in him a love of, and familiarity with the region. Up to the age of ten his formal education was in Moudon. The family moved to Florence in late 1860 where his father was charged with introducing the Prélaz-Burnand rifle to the Tuscan army. Seven months later they returned to Switzerland and set up residence in Schaffhouse, but meantime Eugène had done well at school in Florence and its artistic heritage had made a lasting impression on him. His secondary education continued in Schaffhouse in German and in 1867 he somewhat reluctantly took his father's advice to study architecture at Zurich so he might have a reliable means of earning a living. His artistic talents shone however, and he changed over to study painting, and after four years in Zurich he gained his architecture diploma and went to Geneva to study for a short time under the celebrated Barthélemy Menn whose style he greatly admired.