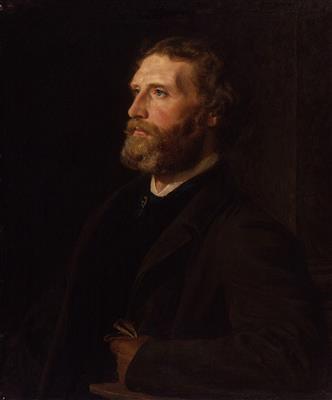 Sir Frederic William Burton RHA (8 April 1816 in Wicklow – 16 March 1900 in London) was an Irish painter who was born in Co. Wicklow on 8 April 1816 And was taken by his parents to live in County Clare on the west coast of Ireland at the age of six. He was the third son of Samuel Frederick Burton and his wife Hanna Mallett. The old Burton seat was Clifden House, Corofin, Co.Clare, which was built around the middle of the eighteenth century. The artist's grandparents were Major Edward William Burton, Clifden, who was High Sheriff of Clare in 1799, and his wife, Jane Blood of nearby Roxton, Co. Clare. Sir Frederick was the third director of the National Gallery, London.

Educated in Dublin, he was elected an associate of the Royal Hibernian Academy at the age of twenty-one and an academician two years later. In 1842 he began to exhibit at the Royal Academy. A visit to Germany and Bavaria in 1842 was the first of a long series of trips to various parts of Europe, which gave him a profound knowledge of the works of the Old Masters. From 1851 he spent 7 years working as a painter in the service of Maximilian II of Bavaria.

Burton worked with George Petrie on archaeological sketches and was on the council of the Royal Irish Academy and the Archaeological Society of Ireland. He was elected an associate of the Royal Society of Painters in Watercolours in 1855, and a full member in the following year. He resigned in 1870, and was reelected as an honorary member in 1886. A knighthood was conferred on him in 1884, and the degree of LL.D. of Dublin in 1889. In his youth he had strong sympathy with the Young Ireland Party. He died in Kensington, west London and is buried in Mount Jerome Cemetery, Dublin.

In 1874 Burton was appointed director of the National Gallery, London, in succession to Sir William Boxall RA. In June 1874, he obtained a special grant to acquire the art collection of Alexander Barker, which included Piero della Francesca's Nativity and Botticelli's Venus and Mars. In 1876 a bequest of 94 paintings, mainly by Dutch artists but also including works by Pollaiuolo, Bouts and Canaletto, was made by the haberdasher Wynne Ellis. Also in this year an extension to the Gallery by E. M. Barry was completed.

During the twenty years that he held this post he was responsible for many important purchases, among them Leonardo da Vinci's Virgin of the Rocks, Raphael's Ansidei Madonna, Anthony van Dyck's Equestrian portrait of Charles I, Hans Holbein the Younger's Ambassadors, and the Admiral Pulido Pareja, by Diego Velázquez (this subsequently attributed to Velázquez's assistant Juan Bautista Martínez del Mazo). He also added to the noted series of Early Italian pictures in the gallery. The number of acquisitions made to the collection during his period of office amounts to more than 500.