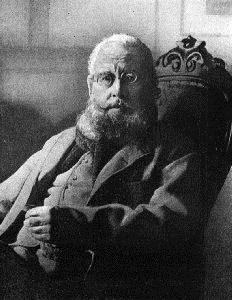 Edward Lear (12 May 1812 – 29 January 1888) was an English artist, illustrator, musician, author and poet, and is known now mostly for his literary nonsense in poetry and prose and especially his limericks, a form he popularised. His principal areas of work as an artist were threefold: as a draughtsman employed to illustrate birds and animals; making coloured drawings during his journeys, which he reworked later, sometimes as plates for his travel books; as a (minor) illustrator of Alfred, Lord Tennyson's poems. As an author, he is known principally for his popular nonsense collections of poems, songs, short stories, botanical drawings, recipes, and alphabets. He also composed and published twelve musical settings of Tennyson's poetry.

Lear was born into a middle-class family at Holloway, North London, the penultimate of twenty-one children (and youngest to survive) of Ann Clark Skerrett and Jeremiah Lear, a stockbroker formerly working for the family sugar refining business. He was raised by his eldest sister, also named Ann, 21 years his senior. Jeremiah Lear ended up defaulting to the London Stock Exchange in the economic upheaval following the Napoleonic Wars; owing to the family's now more limited finances, Lear and his sister were required to leave the family home, Bowmans Lodge, and live together when he was aged four. Ann doted on Edward and continued to act as a mother for him until her death, when he was almost 50 years of age.

Lear suffered from lifelong health afflictions. From the age of six he suffered frequent grand mal epileptic seizures, and bronchitis, asthma, and during later life, partial blindness. Lear experienced his first seizure at a fair near Highgate with his father. The event scared and embarrassed him. Lear felt lifelong guilt and shame for his epileptic condition. His adult diaries indicate that he always sensed the onset of a seizure in time to remove himself from public view. When Lear was about seven years old he began to show signs of depression, possibly due to the instability of his childhood. He suffered from periods of severe melancholia which he referred to as "the Morbids."

Lear was already drawing "for bread and cheese" by the time he was aged 16 and soon developed into a serious "ornithological draughtsman" employed by the Zoological Society and then from 1832 to 1836 by the Earl of Derby, who kept a private menagerie at his estate, Knowsley Hall. He was the first major bird artist to draw birds from real live birds, instead of skins. Lear's first publication, published when he was 19 years old, was Illustrations of the Family of Psittacidae, or Parrots in 1830. One of the greatest ornithological artists of his era, he taught Elizabeth Gould whilst also contributing to John Gould's works and was compared favourably with the naturalist John James Audubon. Unfortunately his eyesight deteriorated too much to work with such precision on the fine drawings and etchings of plates used in lithography, thus he turned to landscape painting and travel.

Among other travels, he visited Greece and Egypt during 1848–49, and toured India during 1873–75, including a brief detour to Ceylon. While travelling he produced large quantities of coloured wash drawings in a distinctive style, which he converted later in his studio into oil and watercolour paintings, as well as prints for his books. His landscape style often shows views with strong sunlight, with intense contrasts of colour.