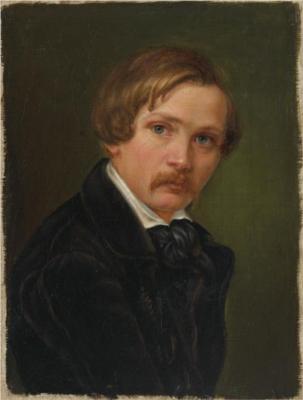 Johann Joseph Eugene von Guérard (17 November 1811 – 17 April 1901) was an Austrian-born artist, active in Australia from 1852 until 1882. Known for his finely detailed landscapes in the tradition of the Düsseldorf school of painting, he is represented in Australia's major public galleries, and is referred to in the country as Eugene von Guerard.

Born in Vienna, Austria, von Guerard toured Italy with his father (a painter of miniatures at the court of Emperor Francis I of Austria) from 1826, and between 1830 and 1832 resided in Rome, where he became involved with a number of German artists. The foremost landscape painter amongst these so-called "Deutsch Römer" was Johann Anton Koch, but he also met there members of the Lukasbund, a group of young German breakaway artists known as the Nazarenes, From 1841 he studied landscape painting in Germany at the Kunstakademie Düsseldorf and travelled widely. Von Guerard's personal artistic style was formed by his first teacher, his miniaturist father with whom he travelled throughout Italy. Other influences ascribed to von Guerard are Claude Lorrain, Nicolas Poussin and Salvator Rosa. During his studies at the Düsseldorf Academy he absorbed the new criterion for German art promoted by his landscape lecturer Johann Wilhelm Schirmer under the directorship of ex-Nazaren member Wilhelm von Schadow: to present "elevated" subject matter in the style of a new "truthful"' realism. The Düsseldorf style of painting combined concepts of prevailing trends: Historicism, a lingering Romanticism and a new visually based Realism that required taking observations from nature. Von Guerards Australian landscapes show his sensitive perception of the Australian landscape, whilst his stylistic methodology exemplifies the confluence of various styles derived from his European artistic heritage.

In 1852 von Guerard arrived in Victoria, Australia, determined to try his luck on the Victorian goldfields. As a gold-digger he was unsuccessful, but he did produce a large number of intimate studies of goldfields life, quite different from the deliberately awe-inspiring landscapes for which he was later to become famous. Realising that there were opportunities for an artist in Australia, he abandoned the diggings and was soon undertaking commissions recording the dwellings and properties of wealthy pastoralists.

By the early 1860s von Guerard was recognised as the foremost landscape artist in the colonies, touring Southeast Australia and New Zealand in pursuit of the sublime and the picturesque. He is most known for the wilderness paintings produced during this time, which are remarkable for their shadowy lighting and fastidious detail. Indeed, his view of Tower Hill in south-western Victoria was used as a botanical template over a century later when the land, which had been laid waste and polluted by agriculture, was systematically reclaimed, forested with native flora and made a state park. The scientific accuracy of such work has led to a reassessment of von Guerard's approach to wilderness painting, and some historians believe it likely that the landscapist was strongly influenced by the environmental theories of the leading scientist Alexander von Humboldt. Others attribute his 'truthful representation' of nature to the criterion for figure and landscape painting set by the Düsseldorf Academy.