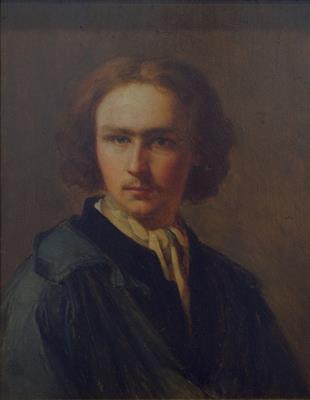 He was born near Breslau, and was a pupil of Heinrich Anton Dähling at the Berlin Academy. He first devoted himself to landscape. In this period of his artistic career Lessing was influenced by the landscapes of Caspar David Friedrich: his themes he depicted were castle ruins, forgotten cemeteries, rugged rock formations, which he inhabited with figures of monks, knights and thieves. In 1826 obtained a prize with his Cemetery in Ruins. He accompanied Friedrich Wilhelm Schadow to Düsseldorf, where he continued his studies, devoting himself to historical paintings. In 1830, when Schadow went to Italy, Lessing occupied his place as director of the academy, exercising great influence on the Düsseldorf school of painting. His picture Das trauernde Königspaar (Mourning Royal Couple) brought him great popularity. In 1837, he received a gold medal at Paris; he was a member of the Berlin Academy and was the recipient of several orders. In 1858 he was appointed director of the gallery at Karlsruhe, where he continued his activity as a painter until his death in 1880.