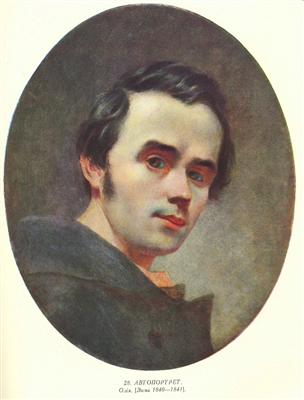 Taras Hryhorovych Shevchenko (March 9 [O.S. February 25] 1814 – March 10 [O.S. February 26] 1861) was a Ukrainian poet, writer, artist, public and political figure, as well as folklorist and ethnographer. His literary heritage is regarded to be the foundation of modern Ukrainian literature and, to a large extent, the modern Ukrainian language. Shevchenko is also known for many masterpieces as a painter and an illustrator.

He was a member of the Sts Cyril and Methodius Brotherhood and an academician of the Imperial Academy of Arts. In 1847 Shevchenko was politically convicted for writing in the Ukrainian language, promoting the independence of Ukraine and ridiculing the members of the Russian Imperial House.

Taras Shevchenko was born on March 9 [O.S. February 25] 1814 in the village of Moryntsi, Zvenyhorodka county, Kiev Governorate, Russian Empire (today Zvenyhorodka Raion, Ukraine). He was the third child after his sister Kateryna and brother Mykyta, in family of serf peasants Hryhoriy Ivanovych Shevchenko (1782? – 1825) and Kateryna Yakymivna Shevchenko (Boiko) (1782? – August 6, 1823), both of whom were owned by landlord Vasily Engelhardt. According to the family legends, Taras's forefathers were Cossacks who served in the Zaporizhian Host and had taken part in the Ukrainian uprisings of the 17th and 18th centuries. Those uprisings were brutally suppressed in Cherkasy, Poltava, Kiev, Bratslav, and Chernihiv disrupting normal social life for many years afterwards. Most of the local population were then enslaved and reduced to poverty.

In 1816 Shevchenko family moved back to the village of Kyrylivka (today - Shevchenkove) in Zvenyhorodka county where Taras' father, Hryhoriy Ivanovych, had been born. Taras spent his childhood years in the village. On May 24 [O.S. May 12] 1816, Taras' sister Yaryna was born, and on February 7 [O.S. January 26] 1819 - Maria. Once, young Taras went looking for "the iron pillars that hold up the sky" and got lost. Chumaks who met the boy took him with him to Kerelivka. On March 20 [O.S. March 8] 1821 Taras' brother Yosyp was born.

In the fall of 1822 Taras started to take some grammar classes at a local precentor (dyak) Sovhyr. At that time Shevchenko became familiar with Hryhoriy Skovoroda's works. During 1822-1828 Shevchenko painted horses and soldiers.

On February 10 [O.S. January 29] 1823 his older sister and nanny Kateryna married Anton Krasytskyi, a serf "from Zelena Dibrova". On September 1 [O.S. August 20] 1823 Taras' hard working mother died. A month later on October 19 [O.S. October 7] 1823 his father married a widow Oksana Tereshchenko, a native of Moryntsi village, who already had three children of her own. She treated her step children and, particularly, little Taras, with great cruelty.

On July 4 [O.S. June 22] 1824 Taras's half-sister Maria from the second marriage of Hryhoriy Ivanovych was born. In 1824 Taras, along with his father, became a traveling merchant (chumak) and traveled to Zvenyhorodka, Uman, Yelizavetgrad (today Kropyvnytskyi). At the age of eleven Taras became an orphan when, on April 2 [O.S. March 21] 1825, his father died as a serf in corvée. Soon his stepmother along with her children returned to Moryntsi.

Taras went to work for precentor (dyak) Bohorsky who had just arrived from Kiev in 1824. As an apprentice, Taras carried water, heated up a school, served the precentor, read psalms over the dead and continued to study. At that time Shevchenko became familiar with some works of Ukrainian literature. Soon, tired of Bohorsky's long term mistreatment, Shevchenko escaped in search of a painting master in the surrounding villages. For several days he worked for deacon Yefrem in Lysianka, later in other places around in southern part of Kiev Governorate (villages Stebliv and Tarasivka). In 1827 Shevchenko was herding community sheep near his village. He then met Oksana Kovalenko, a childhood friend, whom Shevchenko mentions in his works on multiple occasions. He dedicated the introduction of his poem "Mariana, the Nun" to her.