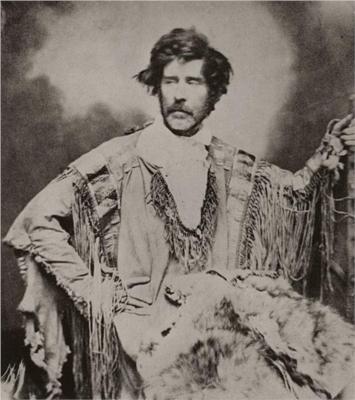 Paul Kane (September 3, 1810 – February 20, 1871) was an Irish-born Canadian painter, famous for his paintings of First Nations peoples in the Canadian West and other Native Americans in the Columbia District.

A largely self-educated artist, Paul Kane grew up in Toronto (then known as York) and trained himself by copying European masters on a study trip through Europe. He undertook two voyages through the wild Canadian northwest in 1845 and from 1846 to 1848. The first trip took him from Toronto to Sault Ste. Marie and back. Having secured the support of the Hudson's Bay Company, he set out on a second, much longer voyage from Toronto across the Rocky Mountains to Fort Vancouver and Fort Victoria.

On both trips Kane sketched and painted Aboriginal peoples and documented their lives. Upon his return to Toronto, he produced more than one hundred oil paintings from these sketches. Kane's work, particularly his field sketches, are still a valuable resource for ethnologists. The oil paintings he completed in his studio are considered a part of the Canadian heritage, although he often embellished them considerably, departing from the accuracy of his field sketches in favour of more dramatic scenes.

Kane was born in Mallow, County Cork in Ireland, the fifth child of the eight children of Michael Kane and Frances Loach. His father, a soldier from Preston, Lancashire, England, served in the Royal Horse Artillery until his discharge in 1801. The family then settled in Ireland. Sometime between 1819 and 1822, they immigrated to Upper Canada and settled in York, which would later, in March 1834, become Toronto. There, Kane's father operated a shop as a spirits and wine merchant.

Not much is known about Kane's youth in York, which at that time was a small settlement of a few thousand people. He went to school at Upper Canada College, and then received some training in painting by an art teacher named Thomas Drury at the Upper Canada College around 1830. In July 1834, he displayed some of his paintings in the first (and only) exhibition of The Society of Artists and Amateurs in Toronto, gaining a favourable review by a local newspaper, The Patriot.

Kane began a career as a sign and furniture painter at York, moving to Cobourg, Ontario, in 1834. At Cobourg, he took up a job in the furniture factory of Freeman Schermerhorn Clench, but also painted several portraits of the local personalities, including the sheriff and his employer's wife. In 1836 Kane moved to Detroit, Michigan, where the American artist James Bowman was living. The two had met earlier at York. Bowman had persuaded Kane that studying art in Europe was a necessity for an aspiring painter, and they had planned to travel to Europe together. But Kane had to postpone the trip, as he was short of money to pay for the passage to Europe and Bowman had married shortly before and was not inclined to leave his family. For the next five years, Kane toured the American Midwest, working as an itinerant portrait painter, travelling to New Orleans.