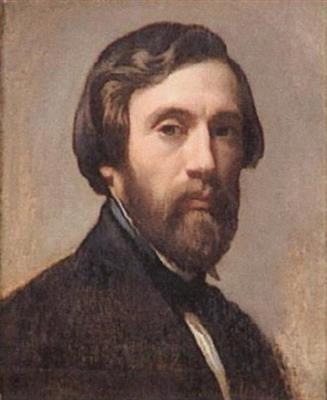 Marc Gabriel Charles Gleyre (2 May 1806 – 5 May 1874), was a Swiss artist who was a resident in France from an early age. He took over the studio of Paul Delaroche in 1843 and taught a number of younger artists who became prominent, including Claude Monet, Pierre-Auguste Renoir, Alfred Sisley, James Abbott McNeill Whistler, Auguste Toulmouche, and Louis-Frederic Schützenberger., Henry-Lionel Brioux.

Gleyre was born in Chevilly, near Lausanne. His parents died when he was eight or nine years old, and he was brought up by an uncle in Lyon, France, who sent him to the city's industrial school. He began his formal artistic education in Lyon under Bonnefond, before moving to Paris, where he enrolled at the École des Beaux-Arts under Hersent. He also attended the Academie Suisse and studied watercolour technique in the studio of Richard Parkes Bonington. He then went to Italy, where he became acquainted with Horace Vernet and Louis Léopold Robert.

It was through Vernet's recommendation that he was chosen by the American traveller John Lowell Jr. to accompany him on his journeys round the eastern Mediterranean, recording the scenes and ethnographic subjects they met with. They left Italy in spring 1834 and visited Greece, Turkey and Egypt, where they remained together until November 1835, when Lowell left for India. Gleyre continued his travels around Egypt and Syria, not returning to France until 1838. He returned to Lyons in shattered health, having been attacked with ophthalmia, or inflammation of the eye, in Cairo, and struck down by fever in Lebanon.

On his recovery he proceeded to Paris, and, establishing a modest studio in the rue de Université, began carefully to work out the ideas which had been slowly shaping themselves in his mind. Mention is made of two decorative panels Diana leaving the Bath, and a Young Nubian as almost the first fruits of his genius; but these did not attract public attention until much later, and the painting by which he practically opened his artistic career was the Apocalyptic Vision of St John, sent to the Salon of 1840.This was followed in 1843 by Evening, which received a medal of the second class, and afterwards became widely popular under the title Lost Illusions. It depicts a poet seated on the bank of a river, with his head drooping and a wearied posture, letting his lyre slip from a careless hand, and gazing sadly at a bright company of maidens whose song is slowly dying from his ear as their boat is borne slowly from his sight.

In spite of the success of these first ventures, Gleyre retired from public competition, and spent the rest of his life in quiet devotion to his artistic ideals, neither seeking the easy applause of the crowd, nor turning his art into a means of aggrandizement and wealth. After 1845, when he exhibited the Separation of the Apostles, he contributed nothing to the Salon except the Dance of the Bacchantes in 1849. Yet he worked steadily and was productive. He had an "infinite capacity of taking pains," and when asked by what method he attained to such marvelous perfection of workmanship, he would reply, "En y pensant toujours." Many years often intervened between the first conception of a piece and its embodiment, and years not infrequently between the first and the final stage of the embodiment itself. A landscape was apparently finished; even his fellow artists would consider it done; Gleyre alone was conscious that he had not "found his sky."