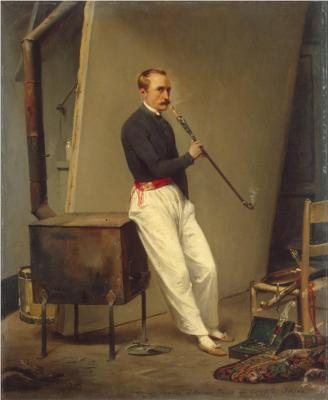 Vernet was born to Carle Vernet, another famous painter, who was himself a son of Claude Joseph Vernet. He was born in the Paris Louvre, while his parents were staying there during the French Revolution. Vernet quickly developed a disdain for the high-minded seriousness of academic French art influenced by Classicism, and decided to paint subjects taken mostly from contemporary life. During his early career, when Napoleon Bonaparte was in power, he began depicting the French soldier in a more familiar, vernacular manner rather than in an idealized, Davidian fashion. Some of his paintings that represent French soldiers in a more direct, less idealizing style, include Dog of the Regiment, Trumpeter's Horse, and Death of Poniatowski.

He gained recognition during the Bourbon Restoration for a series of battle paintings commissioned by the duc d'Orleans, the future King Louis-Philippe. Critics marvelled at the incredible speed with which he painted. Many of his paintings made during this early phase of his career were "noted for their historical accuracy as well as their charged landscapes." Examples of paintings in this style include his Four Battles series: The Battle of Jemappes (1821), The Battle of Montmirail (1822), The Battle of Hanau (1824), and The Battle of Valmy (1826).

Over the course of his long career, Horace Vernet was honoured with dozens of important commissions. King Louis-Philippe was one of his most prolific patrons. His depictions of Algerian battles, such as the Capture of the Smahla and the Capture of Constantine, were well-received, as they were vivid depictions of the French army in the heat of battle. After the fall of the July Monarchy during the Revolution of 1848, Vernet discovered a new patron in Napoléon III of France. He continued to paint representations of the heroic French army during the Second Empire and maintained his commitment to representing war in an accessible and realistic way. He accompanied the French Army during the Crimean War, producing several paintings, including one of the Battle of the Alma, which was not as well received as his earlier paintings. One well known and possibly apocryphal anecdote maintains that when Vernet was asked to remove a certain obnoxious general from one of his paintings, he replied, "I am a painter of history, sire, and I will not violate the truth," hence demonstrating his fidelity to representing war truthfully.

Vernet died in his hometown of Paris in 1863.

In Arthur Conan Doyle's Sherlock Holmes story "The Adventure of the Greek Interpreter" Holmes claims to be related to Vernet, stating, "My ancestors were country squires... my grandmother... was the sister of Vernet, the French artist.", without further clarifying whether this is Claude Joseph Vernet, Carle Vernet, or Horace Vernet.