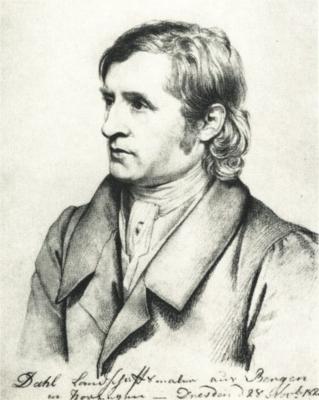 Johan Christian Claussen Dahl (24 February 1788 – 14 October 1857), often known as J. C. Dahl or I. C. Dahl, was a Norwegian artist who is considered the first great romantic painter in Norway, the founder of the "golden age" of Norwegian painting, and one of the greatest European artists of all time. He is often described as "the father of Norwegian landscape painting" and is regarded as the first Norwegian Painter ever to reach a level of artistic accomplishment comparable to that attained by the greatest European artists of his day. He was also the first acquire genuine fame and cultural renown abroad. As one critic has put it, "J.C. Dahl occupies a central position in Norwegian artistic life of the first half of the 19th century.

Although Dahl spent much of his life outside of Norway, his love for his country is clear in the motifs he chose for his paintings and in his extraordinary efforts on behalf of Norwegian culture generally. Indeed, if one sets aside his own monumental artistic creations, his other activities on behalf of art, history, and culture would still have guaranteed him a place at the very heart of the artistic and cultural history of Norway. He was, for example, a key figure in the founding of the Norwegian National Gallery and of several other major art institutions in Norway, as well as in the preservation of Norwegian stave churches and the restoration of the Nidaros Cathedral in Trondheim and Håkonshallen in Bergen.

Dahl came from a very simple background – his father was a modest fisherman in Bergen, Norway – and he would later look back at his youth with bitterness. He regretted that he never had a "real teacher" in his childhood and, despite all his spectacular success, he believed that if he had been more fortunate in his birth, he would have achieved even more than he had.

As a boy, Dahl was educated by a sympathetic mentor at the Bergen Cathedral who at first thought that this bright student would make a good priest, but then, recognizing his remarkably precocious artistic ability, arranged for him to be trained as an artist. From 1803 to 1809 Dahl studied with the painter Johan Georg Müller (no), whose workshop was the most important one in Bergen at the time. Still, Dahl looked back on his teacher as having kept him in ignorance in order to exploit him, putting him to work painting theatrical sets, portraits, and views of Bergen and its surroundings. Another mentor, Lyder Sagen, showed the aspiring artist books about art and awakened his interest in historical and patriotic subjects. It was also Sagen who took up a collection that made it possible for Dahl to go to Copenhagen in 1811 to complete his education at the academy there.

As important as Dahl's studies at the academy in Copenhagen were his experiences in the surrounding countryside and in the city's art collections. In 1812 he wrote to Sagen that the landscape artists he most wished to emulate were Ruisdahl and Everdingen, and for that reason he was studying “nature above all,” Dahl's artistic program was, then, already in place: he would become a part of the great landscape tradition, but he would also be as faithful as possible to nature itself.