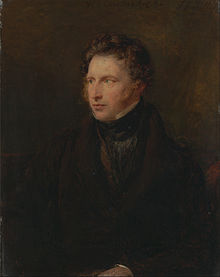 William Collins RA (8 September 1788 in London – 17 February 1847 in London) was an English landscape and genre painter. In the late 19th century, his work was more popular and highly valued than even that of J. M. W. Turner or John Constable.

Collins was born in Great Titchfield Street, London, son of William Collins Sr., an Irish-born picture-dealer and writer. He showed a great aptitude for art from an early age, and was, for a while, an informal pupil of George Morland. In 1807, he entered the schools of the Royal Academy (at the same time as William Etty), and exhibited at the Academy for the first time in the same year. In 1809 he was awarded a medal in the life school, and exhibited three pictures - Boy at Breakfast, Boys with a Bird's-nest and a Portrait of Master Lee as he spoke the Prologue at the Haymarket Theatre.

In 1811, Collins sold a picture entitled The Young Fifer, to the Marquis of Stafford for 80 guineas, and the next year produced the work which made him famous, The Sale of the Pet Lamb, which was sold for 140 forty guineas and engraved by S. W. Reynolds. He now became the chief support of his family - following the death of his father (in financial difficulty) in that year - and found some valuable patrons, especially Sir Thomas Freeman Heathcote, Sir John Leicester, Sir Robert Peel, Sir George Beaumont, and Lord Liverpool. In 1814 two pictures, The Blackberry Gatherers and The Birdcatchers (both sold privately), won him an associateship of the Royal Academy (ARA).

In 1815, Collins undertook a sketching tour of the coast near Cromer, and produced a Scene on the Coast of Norfolk which was acquired by the Prince Regent. In 1817 he visited Paris with Leslie and Washington Allston, and painted The Departure of the Diligence from Rouen, and the Scene on the Boulevards (both sold privately) - these were exhibited at the Royal Academy in 1818. He also painted several portraits around this time.

In 1820, Collins was elected a Royal Academician (RA), presenting as his diploma picture The Young Anglers. In 1822 he married Harriet Geddes, sister of the portrait painter Margaret Sarah Carpenter. He continued to exhibit and travel in England and Scotland, and his art enjoyed great popularity. In 1826 he painted The Fisherman's Departure, (engraved by Phelps), and in 1828 made a tour of the Netherlands and Belgium, living for short time in Boulogne in 1836. Rustic Hospitality was painted in 1834, and, in 1836, Sunday Morning and As Happy as a King, the subject of the latter picture having been suggested to Collins by the story of a country boy whose ideal of regal happiness was swinging upon a gate all day long and eating fat bacon.

In September 1836, Collins left London for Italy, where he remained there until 1838. During these two years he occupied himself unremittingly in advancing his knowledge of painting, but had to return due to illness. He then began a series of pictures depicting Italian life including Poor Travellers at the door of a Capuchin Convent near Vico, Bay of Naples and A Scene near Subiaco, which were exhibited at the Royal Academy in 1839. These were followed in 1840–1841 by two subjects taken from the New Testament - Our Saviour with the Doctors in the Temple, and The Two Disciples at Emmaus.