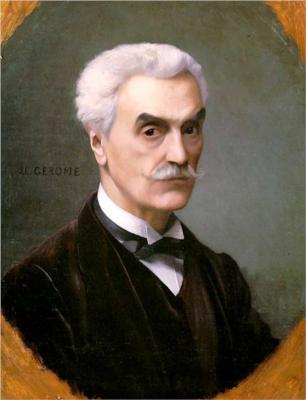 Jean-Léon Gérôme (11 May 1824 – 10 January 1904) was a French painter and sculptor in the style now known as academicism. The range of his oeuvre included historical painting, Greek mythology, Orientalism, portraits, and other subjects, bringing the academic painting tradition to an artistic climax. He is considered one of the most important painters from this academic period. He was also a teacher with a long list of students.

Jean-Léon Gérôme was born at Vesoul, Haute-Saône. He went to Paris in 1840 where he studied under Paul Delaroche, whom he accompanied to Italy (1843–44). He visited Florence, Rome, the Vatican and Pompeii, but he was more attracted to the world of nature. Taken by a fever, he was forced to return to Paris in 1844. On his return, he followed, like many other students of Delaroche, into the atelier of Charles Gleyre and studied there for a brief time. He then attended the École des Beaux-Arts. In 1846 he tried to enter the prestigious Prix de Rome, but failed in the final stage because his figure drawing was inadequate.

His painting, The Cock Fight (1846), is an academic exercise, depicting a nude young man and a lightly draped young woman with two fighting cocks, the Bay of Naples in the background. He sent this painting to the Salon of 1847, where it gained him a third-class medal. This work was seen as the epitome of the Neo-Grec movement that had formed out of Gleyre's studio (such as Henri-Pierre Picou (1824–1895) and Jean-Louis Hamon), and was championed by the influential French critic Théophile Gautier.

Gérôme abandoned his dream of winning the Prix de Rome and took advantage of his sudden success. His paintings The Virgin, the Infant Jesus and St John (private collection) and Anacreon, Bacchus and Cupid (Musée des Augustins, Toulouse, France) took a second-class medal in 1848. In 1849, he produced the paintings Michelangelo (also called In his studio) (now in private collection) and A portrait of a Lady (Musée Ingres, Montauban).

In 1851, he decorated a vase, later offered by Emperor Napoleon III of France to Prince Albert, now part of the Royal Collection at St. James's Palace, London. He exhibited Bacchus and Love, Drunk, a Greek Interior and Souvenir d'Italie, in 1851; Paestum (1852); and An Idyll (1853).

In 1852, Gérôme received a commission by Alfred Emilien Comte de Nieuwerkerke, Surintendant des Beaux-Arts to the court of Napoleon III, for the painting of a large historical canvas, the Age of Augustus. In this canvas he combines the birth of Christ with conquered nations paying homage to Augustus. Thanks to a considerable down payment, he was able to travel in 1853 to Constantinople, together with the actor Edmond Got. This would be the first of several travels to the East: in 1854 he made another journey to Greece and Turkey and the shores of the Danube, where he was present at a concert of Russian conscripts, making music under the threat of a lash.

In 1853, Gérôme moved to the Boîte à Thé, a group of studios in the Rue Notre-Dame-des-Champs, Paris. This would become a meeting place for other artists, writers and actors. George Sand entertained in the small theatre of the studio the great artists of her time such as the composers Hector Berlioz, Johannes Brahms and Gioachino Rossini and the novelists Théophile Gautier and Ivan Turgenev.