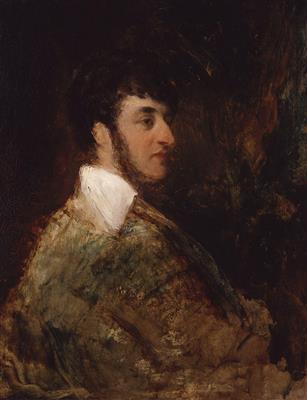 John Frederick Lewis RA (London 14 July 1804 – 15 August 1876) was an English Orientalist painter. He specialized in Oriental and Mediterranean scenes in detailed watercolour or oils, very often repeating the same composition in a version in each medium. He lived for several years in a traditional mansion in Cairo, and after his return to England in 1851 he specialized in highly detailed works showing both realistic genre scenes of Middle Eastern life and more idealized scenes in upper class Egyptian interiors with little apparent Western influence.


His very careful and loving representation of Islamic architecture, furnishings, screens, and costumes set new standards of realism, which influenced other artists, including the leading French Orientalist painter Jean-Léon Gérôme in his later works. Unlike many other Orientalist painters who took a salacious interest in the women of the Middle East, he "never painted a nude", and his wife modelled for several of his harem scenes. These, with the rare examples by the classicist painter Lord Leighton, imagine "the harem as a place of almost English domesticity, ... [where]... women's fully clothed respectability suggests a moral healthiness to go with their natural good looks".


He was the son of Frederick Christian Lewis (1779–1856), an engraver and landscape painter, whose German father had moved to England and changed his name from Ludwig. The leading bookbinder Charles Lewis was John Frederick's uncle, and his younger brothers, another Frederick Christian and Charles George Lewis, were also artists, the latter mainly in reproductive engraving, especially after Edwin Landseer (1802-1873), a childhood neighbour and friend of John Frederick.


Lewis and Landseer trained together in the workshop of Sir Thomas Lawrence. Initially Lewis, like Landseer, was an animal painter, and he often included animals throughout his later works, in particular a pet gazelle he had in Cairo. He published prints of the big cats in 1826 and twelve domesticated animals in 1826, and painted two large scenes with animals in Windsor Great Park, now Royal Collection (John Clark(e) with the animals at Sandpit Gate, c. 1825) and Tate Britain.


Lewis toured Europe in 1827, the year he began to paint in watercolour, then travelled in Spain and Morocco between 1832 and 1834. The drawings he made were turned into lithographs by him and other artists, and published as Sketches and Drawings of the Alhambra, made during a Residence in Granada in the Years 1833–4 (1835) and Lewis's Sketches of Spain and Spanish Character (1836). For a while he became known as "Spanish Lewis", to distinguish him from "Indian Lewis", his brother Frederick Christian, who went India in 1834 before dying young.


Lewis was an early traveller on what was to become a well-trodden route for English artists, though some ten years behind David Wilkie in Spain. David Roberts, who became the other leading British Orientalist, mainly through his lithographs, was in Spain and the Middle East at the same time as Lewis, though the two rarely met, and William James Müller had been in Cairo in 1838. But no other English artist of the period had such a sustained period in what was then the Ottoman Empire as Lewis did on his last period abroad.