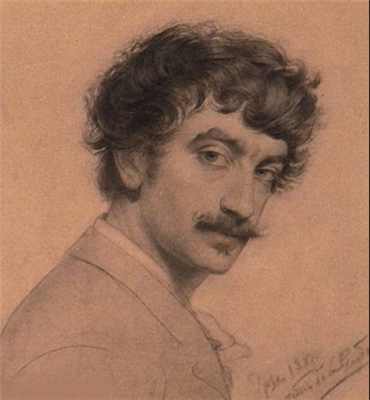 Antonio de La Gándara (16 December 1861 – 30 June 1917) was a French painter, pastellist and draughtsman. La Gándara was born in Paris, France, but his father was of Spanish ancestry, born in San Luis Potosí, Mexico, and his mother was from England. La Gándara's talent was strongly influenced by both cultures. At only 15 years of age, La Gándara was admitted as a student of Jean-Léon Gérôme and Cabanel at the École des Beaux-Arts. Soon, he was recognized by the jury of the 1883 Salon des Champs-Élysées, who singled out the first work he ever exhibited: a portrait of Saint Sebastian.


Less than ten years later, young La Gándara had become one of the favourite artists of the Paris elite. His models included Countess Greffulhe, the Grand Duchess of Mecklenburg, the Princess of Chimay, the Prince de Polignac, the Prince de Sagan, Charles Leconte de Lisle, Paul Verlaine, Leonor Uriburu de Anchorena, Sarah Bernhardt, Romaine Brooks, Jean Moreas, Winnaretta Singer, and Virginie Amélie Avegno Gautreau (seen below, and more famously portrayed by John Singer Sargent in his painting Madame X). Influenced by Chardin, his skill is demonstrated in his portraits, in a simplicity with the finest detail, or in the serenity of his scenes of the bridges, parks, and streets of Paris.


Gandara illustrated a small number of publications, including Les Danaïdes by Camille Mauclair. With James McNeill Whistler, Jean-Louis Forain, and Yamamoto, La Gándara illustrated Les Chauves-Souris ("The Bats") by the French poet Robert de Montesquiou. The book, published in 1893, has become a rare collector's item. The first exhibition of La Gándara's work organised in New York by Durand-Ruel in 1898 was a major success and confirmed the painter as one of the masters of his time. Major newspapers and magazines routinely reproduced his portraits, several of which made the front page of publications like the fashionable Le Figaro magazine. Gandara participated in the most important exhibitions in Paris, Brussels, Berlin, Dresden, Barcelona and Saragossa.


La Gándara died on 30 June 1917, and was interred in Père Lachaise Cemetery, Paris, France. Although his fame faded rapidly after his death, growing interest in the 20th century saw him regain popularity as a key witness to the art of his time, not only through his canvases, but also as the model chosen by the novelists Jean Lorrain and Marcel Proust, and through the anecdotes of his own life narrated by Edmond de Goncourt, Georges-Michel, and Montesquiou.


On 3 November 2018, a major retrospective opened for four months at the Musée Lambinet in Versailles, bringing together more than one hundred works by the painter as well as many documents. Exhibition curator: Xavier Mathieu.


A novel was published by the Editions L'Harmattan in 2016 that narrates La Gandara's remarkable life: Antonio de La Gandara - The Gentleman painter of the Belle Epoque.