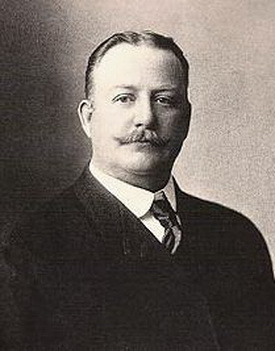 Frederic Sackrider Remington (October 4, 1861 – December 26, 1909) was an American painter, illustrator, sculptor, and writer who specialized in depictions of the American Old West, specifically concentrating on scenes from the last quarter of the 19th century in the Western United States and featuring images of cowboys, American Indians, and the U.S. Cavalry, among other figures from Western culture.

Remington was born in Canton, New York in 1861 to Seth Pierrepont Remington (1830–1880) and Clarissa "Clara" Bascom Sackrider (1836–1912). His paternal family owned hardware stores and emigrated from Alsace-Lorraine in the early 18th century. His maternal family of the Bascom line was of French Basque ancestry, coming to America in the early 1600s and founding Windsor, Connecticut. Remington's father was a colonel in the American Civil War whose family had arrived in America from England in 1637. He was a newspaper editor and postmaster, and the family was active in local politics and staunchly Republican. One of Remington's great-grandfathers, Samuel Bascom, was a saddle maker by trade, and the Remingtons were fine horsemen. Frederic Remington was related by family bloodlines to Indian portrait artist George Catlin and cowboy sculptor Earl W. Bascom.

Frederic Remington was also a cousin to Eliphalet Remington, founder of the Remington Arms Company, which is considered America's oldest gunmaker. He was also related to three famous mountain men—Jedediah Smith, Jonathan T. Warner and Robert "Doc" Newell. Through the Warner side of his family, Remington was related to General George Washington, America's first president.

Colonel Remington was away at war during most of the first four years of his son's life. After the war, he moved his family to Bloomington, Illinois for a brief time and was appointed editor of the Bloomington Republican, but the family returned to Canton in 1867. Remington was the only child of the marriage, and received constant attention and approval. He was an active child, large and strong for his age, who loved to hunt, swim, ride, and go camping. He was a poor student though, particularly in math, which did not bode well for his father's ambitions for his son to attend West Point. He began to make drawings and sketches of soldiers and cowboys at an early age.

The family moved to Ogdensburg, New York when Remington was eleven and he attended Vermont Episcopal Institute, a church-run military school, where his father hoped discipline would rein in his son's lack of focus and perhaps lead to a military career. Remington took his first drawing lessons at the Institute. He then transferred to another military school where his classmates found the young Remington to be a pleasant fellow, a bit careless and lazy, good-humored, and generous of spirit, but definitely not soldier material. He enjoyed making caricatures and silhouettes of his classmates. At sixteen, he wrote to his uncle of his modest ambitions, "I never intend to do any great amount of labor. I have but one short life and do not aspire to wealth or fame in a degree which could only be obtained by an extraordinary effort on my part". He imagined a career for himself as a journalist, with art as a sideline.