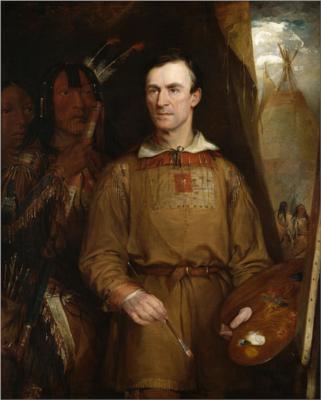 George Catlin (July 26, 1796 – December 23, 1872) was an American painter, author, and traveler, who specialized in portraits of Native Americans in the Old West. Travelling to the American West five times during the 1830s, Catlin was the first white man to depict Plains Indians in their native territory.

George Catlin was born in Wilkes-Barre, Luzerne County, Pennsylvania. As a child growing up in Pennsylvania, Catlin had spent many hours hunting, fishing, and looking for American Indian artifacts. His fascination with Native Americans was kindled by his mother, who told him stories of the western frontier and how she was captured by a tribe when she was a young girl. Years later, a group of Native Americans came through Philadelphia dressed in their colorful outfits and made quite an impression on Catlin.

His early work included engravings, drawn from nature, of sites along the route of the Erie Canal in New York State. Several of his renderings were published in one of the first printed books to use lithography, Cadwallader D. Colden's Memoir, Prepared at the Request of a Committee of the Common Council of the City of New York, and Presented to the Mayor of the City, at the Celebration of the Completion of the New York Canals, published in 1825, with early images of the City of Buffalo.

Following a brief career as an attorney, Catlin produced two major collections of paintings of American Indians and published a series of books chronicling his travels among the native peoples of North, Central, and South America. Spurred by relics brought back by the famous Lewis and Clark Expedition of 1804–1806 owned by his friend, Charles Willson Peale, and claiming his interest in America’s 'vanishing race', sparked by a visiting American Indian delegation in Philadelphia, he set out to record the appearance and customs of America’s native peoples.

Catlin began his journey in 1830 when he accompanied General William Clark on a diplomatic mission up the Mississippi River into Native American territory. St. Louis became Catlin’s base of operations for five trips he took between 1830 and 1836, eventually visiting fifty tribes. Two years later he ascended the Missouri River more than 3000 km to Fort Union Trading Post, near what is now the North Dakota-Montana border, where he spent several weeks among indigenous people who were still relatively untouched by European culture. He visited eighteen tribes, including the Pawnee, Omaha, and Ponca in the south and the Mandan, Hidatsa, Cheyenne, Crow, Assiniboine, and Blackfeet to the north. There he produced the most vivid and penetrating portraits of his career. During later trips along the Arkansas, Red, and Mississippi rivers, as well as visits to Florida and the Great Lakes, he produced more than 500 paintings and gathered a substantial collection of artifacts.

When Catlin returned east in 1838, he assembled the paintings and numerous artifacts into his Indian Gallery, and began delivering public lectures that drew on his personal recollections of life among the American Indians. Catlin traveled with his Indian Gallery to major cities such as Pittsburgh, Cincinnati, and New York. He hung his paintings "salon style"—side by side and one above another. Visitors identified each painting by the number on the frame, as listed in Catlin's catalogue. Soon afterward, he began a lifelong effort to sell his collection to the U.S. government. The touring Indian Gallery did not attract the paying public Catlin needed to stay financially sound, and the United States Congress rejected his initial petition to purchase the works.