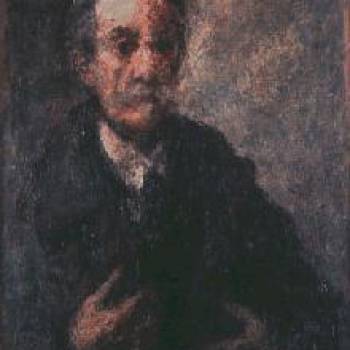 Andrés de Santa Maria (December 16, 1860 – April 29, 1945) was the most internationally known Colombian painter of his time and the pioneer of impressionism in Colombia. His work in solitary as a vanguardist painter, frames the beginnings of modern art in Colombia. Santa Maria search of new artistic expressions generated rejection and controversies around his work. He lived great part of his life in Europe.

Andrés de Santa Maria Hurtado was born in Bogotá, Colombia on December 16, 1860. He was the third son of Andrés de Santa Maria Rovira and Manuela Hurtado. He belonged to a well off family that was politically connected. Both his grandfather and his father worked for several years in high official positions for the Colombian government. In 1862, when he was two years old, his parents took him to Europe. The family lived in London until 1869 when they moved to Brussels. In 1878, his father obtained a position at the Colombian Embassy in France and his family settled in Paris. Santa Maria's desire to be a painter faced the strong opposition of his parents who forced him to follow a career in finances. For a time, he worked as a banker, but at the death of his father in 1882, he was finally able to study painting. He entered the School of Art in Paris and worked in the workshops of Ferdinad Jacques Humbert (1842–1881) and Henri Gervex (1852–1929). Prince Eugen of Sweden and the Spanish painter, Ignacio Zuloaga y Zabaleta, studied with him under Gervex's guidance. The impressionist art movement had a great influence on his career, but Santa Maria was also interested in social subjects shown in the work of Alfred Roll and through him, he was influenced by the realism movement and the paintings of Jean-François Millet and Gustave Courbet.

Santa Maria first obtained recognition when he won a first prize and was accepted to participate in the salon of French Artists in 1887 with his painting Launderers of the Seine. This large and ambitious painting already shows impressionist elements in the use of the reflection of light and his interest in social subjects.

He took part in the salons of 1888, 1889 and 1890. In this early period, Santa Maria painted a variety works with a refine liking for realism in the style of Courbet in works as: The shooters (1885), The reading (1886) and Salomón F. Koppel (1889). These paintings also show Santa Maria's clear command of the rules of the academy. In 1891, he exhibited his painting: The tea party, at the Artistic union of Paris. The tea party is one of his best works of his early period that concludes when he left Europe to go back to Colombia.

Andrés de Santa Maria married Amalia Bidwell Hurtado on January 25, 1893 in Saint-Jean-de-Luz. They had eight children. In 1894, the couple decided to come back to Colombia, where they lived for almost two decades. Shortly after arriving at Bogotá, Santa Maria was appointed professor of landscape at the Escuela Nacional de Bellas Artes (English:The National Academy of Fine Arts), where he brought the experience he had learned in France. However, his work as a vanguadist artist breaking with the traditional academic painting in Colombia was controversial.