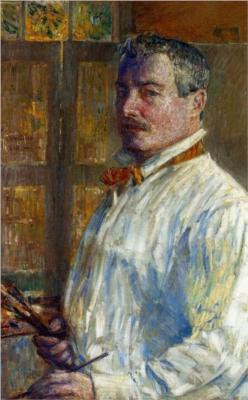 Frederick Childe Hassam (October 17, 1859 – August 27, 1935) was an American Impressionist painter, noted for his urban and coastal scenes. Along with Mary Cassatt and John Henry Twachtman, Hassam was instrumental in promulgating Impressionism to American collectors, dealers, and museums. He produced over 3,000 paintings, oils, watercolors, etchings, and lithographs over the course of his career, and was an influential American artist of the early 20th century.

Hassam (pronounced HASS'm;) (known to all as Childe, pronounced like child; named after an uncle) was born in his family home on Olney Street (Meeting House Hill) in Dorchester, Boston, in 1859. His father Frederick was a moderately successful cutlery businessman with a large collection of art and antiques. He descended from a long line of New Englanders. His mother, Rosa, a native of Maine, shared an ancestor with American novelist Nathaniel Hawthorne. His father claimed descent from a seventeenth-century English immigrant whose name, Horsham, had been corrupted over time to Hassam. With his dark complexion and heavily lidded eyes, many took Childe Hassam to be of Middle Eastern descent—speculation which he enjoyed stoking. In the mid-1880s, he took to painting an Islamic-appearing crescent moon (which eventually degenerated into only a slash) next to his signature, and he adopted the nickname "Muley" (from the Arabic "Mawla", Lord or Master), invoking Muley Abul Hassan, a fifteenth-century ruler of Granada in Washington Irving's novel Tales of the Alhambra.

Hassam demonstrated an interest in art early. He had his first lessons in drawing and watercolor while attending The Mather School, but his parents took little notice of his nascent talent.

As a child, Hassam excelled at boxing and swimming at Dorchester High School. A disastrous fire in November 1872 wiped out much of Boston's commercial district, including his father's business. Hassam left high school after two years (at age 17) despite his uncle's offer to pay for a Harvard education. Hassam preferred to help support his family by working. His father arranged a job in the accounting department of publisher Little, Brown & Company. During that time, Hassam studied the art of wood engraving and found employment with George Johnson, a wood engraver. He quickly proved an adept draftsman (listed as a "draughtsman" in the Boston directory) and he produced designs for commercial engravings such as letterheads and newspapers. Around 1879, Hassam began creating his earliest oil paintings, but his preferred medium was watercolor, mostly outdoor studies.

In 1882, Hassam became a free-lance illustrator (known as a "black-and-white man" in the trade), and established his first studio. He specialized in illustrating children's stories for magazines such as Harper's Weekly, Scribner's Monthly, and The Century. He continued to develop his technique while attending drawing classes at the Lowell Institute (a division of MIT) and at the Boston Art Club, where he took life painting classes.

By 1883, Hassam had exhibited watercolors in his first solo exhibition at the Williams and Everett Gallery in Boston. The following year, his friend Celia Thaxter convinced him to drop his first name and thereafter he was known as "Childe Hassam". He also began to add a crescent symbol in front of his signature, the meaning of which remains unknown.