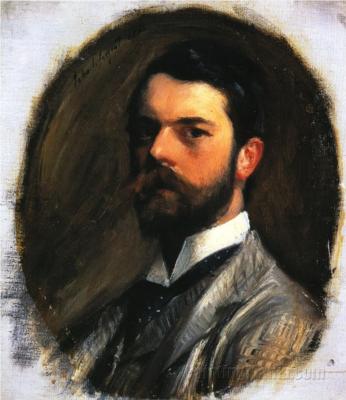 John Singer Sargent was one of the leading portraits painters of his generation, creating images of Edwardian Era high society. A prolific artist, he produced around 900 oil paintings, over 2,000 watercolors and even more sketches and preliminary studies. Born in Italy to American parents, Sargent spent his childhood traveling through Europe. He showed his artistic inclinations at a young age, and in 1874 he began his formal training at the Paris studio of Carolus-Duran. After leaving the studio in 1878, Sargent concentrated on building his craft, traveling through Europe and methodically studying works of old masters in Holland, Spain, and Venice. During his travels, he painted many genre scenes, such as Rosina, Capri (1878) and Venetian Bead Stringers (1880-1882). Sargent also experimented with Impressionist techniques at the influence of Claude Monet, whom he met at the second Impressionist exhibition in 1876. In Sargent’s case, the use of the Impressionist technique is noticeable in landscape paintings like Washerwomen (ca. 1880) and Landscape at Broadway (1885).

In the late 1870s and early 1880s, Sargent was building his reputation in Paris. He received positive critiques for portraits like Portrait of Frances Sherborne Ridley Watts (1877) and subject paintings like El Jaleo (1882). Sargent’s career suffered a setback at the 1884 Paris Salon where he exhibited Madame X (1883-1884), the portrait of the young socialite Virginie Amélie Avegno Gautreau. While the painting received some praise, it was mostly ridiculed and dismissed as a distasteful display of vanity. Sargent defended his work and refused to take it down even in the face of mounting pressure from Gautreau’s mother, who blamed the portrait for ruining her daughter’s reputation. Discouraged and humiliated by the scandal, Sargent left Paris and moved to London.

The scandal of Madame X followed Sargent to England: London patrons were wary of Sargent’s “French style” and he struggled to secure commissions. However, this changed in 1887 when he exhibited the painting Carnation, Lily, Lily, Rose (1885-1886), an image of two children lighting Chinese lanterns at dusk. The painting dazzled critics and audiences, and Sargent was once again in demand. He enjoyed an upscale clientele of aristocrats, wealthy businesspeople, artists, and performers from Europe and America. His international reputation reached its peak in the 1890s and early 1900s. At that time Sargent painted portraits of distinguished figures like Theodore Roosevelt, actress Dame Ellen Terry and author Henry James.

By 1910 Sargent gave up portraiture and focused his attention on painting murals and landscapes. One of his significant later works was the war painting Gassed (1919). The painting was commissioned by the British government who asked Sargent to create a large painting that embodied the idea of Anglo-American cooperation during World War I. In 1924, Sargent’s retrospective exhibition was held at the Grand Central Art Galleries in New York. After the retrospective, the artist returned to London, where he died of heart disease. Memorial exhibitions were held on both sides of the Atlantic: in Boston, New York, and London in 1925-1926.

John Singer Sargent (/ˈsɑːrdʒənt/; January 12, 1856 – April 14, 1925) was an American artist, considered the "leading portrait painter of his generation" for his evocations of Edwardian era luxury. During his career, he created roughly 900 oil paintings and more than 2,000 watercolors, as well as countless sketches and charcoal drawings. His oeuvre documents worldwide travel, from Venice to the Tyrol, Corfu, the Middle East, Montana, Maine, and Florida.

His parents were American, but he was trained in Paris prior to moving to London. Sargent enjoyed international acclaim as a portrait painter, although not without controversy and some critical reservation; an early submission to the Paris Salon, his Portrait of Madame X, was intended to consolidate his position as a society painter, but it resulted in scandal instead. From the beginning his work was characterized by remarkable technical facility, particularly in his ability to draw with a brush, which in later years inspired admiration as well as criticism for a supposed superficiality. His commissioned works were consistent with the grand manner of portraiture, while his informal studies and landscape paintings displayed a familiarity with Impressionism. In later life Sargent expressed ambivalence about the restrictions of formal portrait work, and devoted much of his energy to mural painting and working en plein air. He lived most of his life in Europe. Art historians generally ignored the society artists such as Sargent until the late 20th century.

Before Sargent's birth, his father, FitzWilliam (b. 1820 Gloucester, Massachusetts), was an eye surgeon at the Wills Eye Hospital in Philadelphia 1844–1854. After John's older sister died at the age of two, his mother, Mary (née Singer), suffered a breakdown, and the couple decided to go abroad to recover. They remained nomadic expatriates for the rest of their lives. Although based in Paris, Sargent's parents moved regularly with the seasons to the sea and the mountain resorts in France, Germany, Italy, and Switzerland. While Mary was pregnant, they stopped in Florence, Tuscany, because of a cholera epidemic. Sargent was born there in 1856. A year later, his sister Mary was born. After her birth, FitzWilliam reluctantly resigned his post in Philadelphia and accepted his wife's entreaties to remain abroad. They lived modestly on a small inheritance and savings, living a quiet life with their children. They generally avoided society and other Americans except for friends in the art world. Four more children were born abroad, of whom only two lived past childhood.

Although his father was a patient teacher of basic subjects, young Sargent was a rambunctious child, more interested in outdoor activities than his studies. As his father wrote home, "He is quite a close observer of animated nature." His mother was convinced that traveling around Europe, and visiting museums and churches, would give young Sargent a satisfactory education. Several attempts to have him formally schooled failed, owing mostly to their itinerant life. Sargent's mother was a fine amateur artist and his father was a skilled medical illustrator. Early on, she gave him sketchbooks and encouraged drawing excursions. Young Sargent worked with care on his drawings, and he enthusiastically copied images from The Illustrated London News of ships and made detailed sketches of landscapes. FitzWilliam had hoped that his son's interest in ships and the sea might lead him toward a naval career.