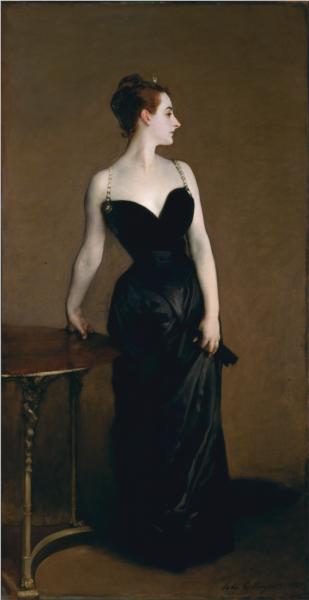 Madame X (1883-1884) by John Singer Sargent caused a great deal of scandal when it was first exhibited at the 1884 Paris Salon. Even though the painting was named Madame *** (later changed to Madame X), the subject was easily recognizable as the young socialite Virginie Amélie Avegno Gautreau. Unlike most of Sargent's portraits, Madame X was not a commission: the artist sought out Gautreau and asked to paint her.

Gautreau was an unconventional beauty known for lavender powdered skin and a highly stylized appearance. Sargent believed she was a great charmer and a subject worthy of grand portrait that would excite Parisian art circles. Both American expatriates, the two had overlapping ambitions as they were establishing themselves in Parisian high society. Gautreau was encouraged by her mother to accept Sargent’s offer. In June 1883 the artist traveled to Gautreau’s estate in Brittany to execute preliminary studies and sketches for the portrait. Depicting Gautreau’s painted skin was a challenge for Sargent; he struggled at times to capture the artificial blue and lavender tones of her complexion. At one point, Sargent became so frustrated with his unsuccessful attempts that he decided to start a new portrait, leaving the unfinished version Study of Madame Gautreau (Madame X) (ca. 1884).

All parties were anticipating success and were unprepared for the devastating outcome: the painting received more ridicule than praise, and it was panned for being a distasteful display of vanity. For the salon audience, the artwork was too brazen: Gautreau's pose is sensual and suggestive, and her presentation is lavish and extravagant. She wears a sumptuous satin gown, a black dress that stands in contrast to her artificially pale skin. Gautreau was known for her bold use of makeup, which was still uncommon among French upper classes. Women were encouraged to use cosmetics moderately to achieve a ‘natural look’ with slightly colored cheeks and lips or thickened eyebrows and eyelashes.

Sargent defended his work vigorously saying his depiction was accurate to reality and his sitter’s appearance. He resisted the negative criticism, which prompted Gautreau’s mother to beg him to take the painting down. Even though Madame X remained at the Salon, Sargent did make one amendment. When the portrait was first presented the right shoulder strap on Madame X’s dress falls off the side, an element that contributed to the suggestive and sexual nature of the painting. Sargent repainted the shoulder strap but resisted pressures to make any further changes.

Gautreau was publically humiliated and mocked for her American crudeness. Later, her beauty was captured by other artists in portraits like Madame Pierre Gautreau (1898) by Antonio de La Gándara and Madame Gautreau (1891) by Gustave Courtois. Sargent was also humiliated: critics compared Madame X to a plastic idol or ghost. After the Salon Sargent left Paris and moved to London, where he continued to build his career. Madame X remained in Sargent’s possession until 1916, when the artist finally sold the painting to the Metropolitan Museum of Art. Sargent remarked that the portrait was probably the best work he ever produced.