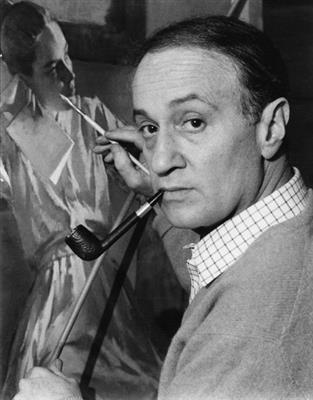 Aaron Shikler in his New York City studio in 1971

Aaron Abraham Shikler (March 18, 1922 – November 12, 2015) was an American artist noted for portraits of American statesmen and celebrities like Jane Engelhard and Sister Parish.

Shikler was born in Brooklyn, New York on March 18, 1922. His parents were Eastern European immigrants who came to the United States before World War I. After graduating from The High School of Music & Art in 1940, Shikler studied at the Tyler School of Art in Philadelphia, and at the Hans Hofmann School in New York. He married Barbara Lurie who he met at Tyler, and had two children, Cathy and Clifford, with her. Barbara was diagnosed with lung cancer and died in 1998.

Jacqueline Kennedy personally selected Shikler in 1970 to provide the posthumous character study of John F. Kennedy, Oil Portrait of John F. Kennedy, which serves as Kennedy's official White House portrait. He also painted the official White House portraits of First Ladies Jacqueline Kennedy and Nancy Reagan, as well as portraits of the Kennedy children. and is represented in numerous public collections such as The Brooklyn Museum of Art, The Metropolitan Museum of Art, the Hirshhorn Museum and Sculpture Garden, the New Britain Museum of American Art, and the National Academy of Design.

Shikler continued to paint in his studio at home until he died of kidney failure on November 12, 2015, surrounded by his friends and family. He was survived by his two children.