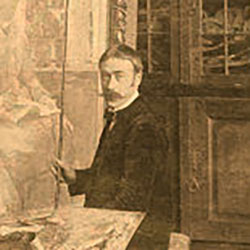 Walter Gay (January 22, 1856 – July 13, 1937) was an American painter noted both for his genre paintings of French peasants, paintings of opulent interior scenes and was a notable art collector.

Walter Gay was born on January 22, 1856 in Hingham, Massachusetts into an established New England family. He was the son of Ebenezer and Ellen Blake (nee Blood) Gay. His uncle was the Boston painter Wincksorth Alan Gay, who introduced the young man to the art community.

In 1876, Gay and his wife moved to Paris, France where he became a pupil of Leon Bonnat. A fellow student during this period was John Singer Sargent with whom Gay developed a friendship. Bonnat encouraged the young artist to travel to Spain, where he studied and copied the work of Velázquez. He also encountered the work of Spanish artist, Mariano Fortuny. These artists became an important influences on Gay's brushwork, use of colour and understanding of light.

Walter Gay received an honorable mention in the Paris Salon of 1885; a gold medal in 1888, and similar awards at Vienna (1894), Antwerp (1895), Berlin (1896) and Munich (1897). He was one of the few artists selected to represent the United States at the Exposition Universelle in Paris in 1889. He became an Officer of the Legion of Honor and a member of the Society of Secession, Munich. During his lifetime, his work was exhibited in every major European city - Antwerp, Berlin, Budapest, Vienna and Paris. In 1904, he was elected into the National Academy of Design as an Associate Academician.

Many young American artists who arrived in Paris in the late 19th-century became Gay's pupils to the extent that the New York Times dubbed him the "Dean of American Artists in Paris." His students who went on to have illustrious careers include: Henry Bacon.

His first compositions were still-lifes, followed by depictions of 18th-century French peasant life. Later he shifted to genre scenes of realistic depictions of peasants and factory workers. However, from around 1895, he abandoned such simple peasant scenes, virtually creating a new genre with his depictions of luxurious interiors. He is most noted for these paintings of opulent interiors show-casing French chateaux and chic private homes. These painterly works display the luxurious detail of domestic interiors which included fine porcelain, furnishings, gilt mirrors, paintings and focussed on the "spirit of an empty room" by avoiding the inclusion of figures.

Gay was also a notable collector of artworks. Following his death in 1937, his widow donated some 200 works of Dutch, Italian, English and French paintings, drawings and illustrations to the Louvre indicating something of the collection's importance.

He married heiress, Matilda E. Travers, the daughter of William R. Travers, a prominent New York City investor and co-founder of Saratoga Race Course. His wife's fortune allowed the couple to live very comfortably. They divided their time between their country homes and their Paris apartment. In Paris, Gay and his wife lived in an apartment on the Left Bank and in 1907, purchased Chateau Le Bréau on a 300-acre (1.2 km) walled park near the Forest of Fontainebleau. His wife maintained a diary of the couple's time in Europe.