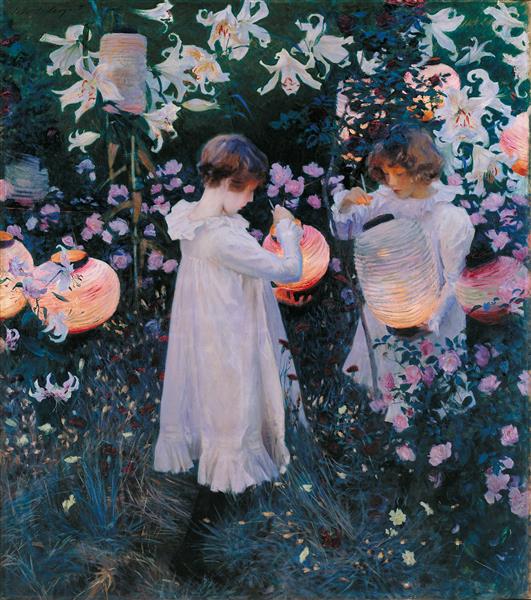 Carnation, Lily, Lily, Rose (1885-1886) by John Singer Sargent was painted en plein air - a French term for ‘painting outdoors.’ This method of painting was particularly important to 19th-century art movements such as the Hudson River School, the Barbizon School, and Impressionism.

The inspiration for the unique lighting effect came during an 1885 boating trip Sargent took with fellow painter Edwin Austin Abbey. On one evening, near the Thames at Pangbourne, he saw Chinese lanterns hanging from trees spreading light over beds of flowers. After Pangbourne, Sargent stayed with artist Francis David Millet at Farm House in Broadway, Worcestershire; and there he began working on the painting. Sargent’s progress was slow; he worked on the painting from September 1885 and completed it sometime in October 1886. It was because Sargent was determined to recreate the light effect from Pangbourne, and painted only a few minutes every evening to capture the same level of light at dusk.

The painting depicts two children lighting Chinese lanterns in a garden. The painting is set in the garden of the Cotswolds village of Broadway, and the models were Dolly and Polly Barnard, the daughters of Sargent’s friend, illustrator Frederick Bernard. He chose Dolly and Polly, who were 11 and 7 years old, because their light blonde hair complemented the color scheme. Sargent produced sketches and studies like Dorothy Barnard (1885-1886) and Polly Barnard (1885-1886) to capture them in their natural poses when painting. Each evening Sargent would prepare his easel and paints, and pose the girls ahead of time to catch the perfect light before it quickly disappeared. As autumn came, the flowers died, and Sargent had to replace them with artificial flowers. One of Sargent’s main preoccupations with the painting was the composition, and he gradually cut two feet off from the left side of the canvas. By doing this, Sargent created an almost square format that resulted in a more concentrated composition.

The title of the painting came from “The Wreath,” an 18th-century song by opera composer Joseph Mazzinghi. The chorus of the songs has the lines: “Tell me have you seen my Flora pass this way? A wreath around her head, around her head she wore, Carnation, lily, lily, rose”. The song possibly relates to the ambiance at Broadway, where Sargent and his friends would spend their evenings singing around the piano.

The painting was first exhibited in 1887 at the Royal Academy exhibition, where it received praise from audiences and critics. In 1887, Tate Gallery purchased the painting, an acquisition that was supported by influential figures such as the Royal Academy President Sir Frederic Leighton. The painting is part of the Tate collection and is displayed at Tate Britain in London.

Carnation, Lily, Lily, Rose is an oil-on-canvas painting made by the Anglo-American painter John Singer Sargent in 1885-6.

The painting depicts two small children dressed in white who are lighting paper lanterns as day turns to evening; they are in a garden strewn with pink roses, accents of yellow carnations and tall white lilies (possibly the Japanese mountain lily, Lilium auratum) behind them. The painting is dominated by green foliage, with no horizon or other horizontal line to give a sense of depth. The viewer seems to be on a level with the children but also looking down on them. The two subjects of the painting are the daughters of the illustrator Frederick Barnard – a friend of Sargent's. Dolly, left, was 11 years-old and Polly, right, 7 years-old; they were chosen for their blonde hair, replacing Sargent's original model, Francis Davis Millet's 5-year-old daughter, dark-haired Katherine. The title comes from the refrain of a popular song "Ye Shepherds Tell Me" by Joseph Mazzinghi, a pastoral glee for a trio of male voices, which mentions Flora wearing "A wreath around her head, around her head she wore, Carnation, lily, lily, rose".

The work is set in an English garden at Farnham House in Broadway in the Cotswolds, where Sargent spent the summer of 1885 with Millet shortly after moving to England from Paris to escape the scandal caused by his 1884 painting Portrait of Madame X. Sargent took inspiration from the lanterns that he saw hanging among trees and lilies while boating on the River Thames at Pangbourne with American artist Edwin Austin Abbey in September 1885. Sargent wanted to capture the exact level of light at dusk so he painted the picture en plein air – outdoors and in the Impressionist manner. Every day from September to November 1885, he painted in the few minutes when the light was perfect, giving the picture an overall purple tint of evening. The flowers in the garden died as summer turned to autumn, and they were replaced with artificial flowers. Sargent resumed painting the following summer at Millet's new home nearby in Broadway and finally finished the painting by the end of October 1886. In the course of working, Sargent cut down the rectangular canvas, removing approximately 2 feet (61 cm) from the left side, to leave an approximately square shape.

The work received a mixed reception at the Royal Academy summer exhibition in 1887, with some criticising his "Frenchified" style. However, there was also much praise, and Sir Frederic Leighton, President of the Royal Academy, encouraged the Tate Gallery to buy the painting later that year, using money from the Chantrey Bequest. It was the first of Sargent's works to be acquired by a public museum. The painting remains part of the Tate collection and is displayed at Tate Britain.