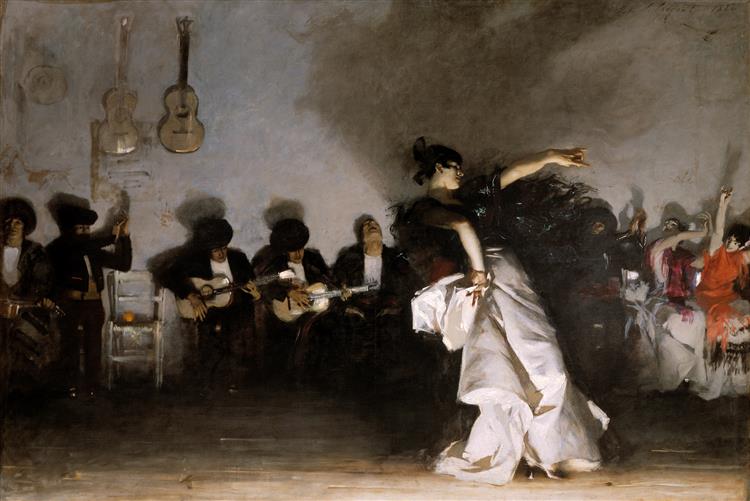 The painting El Jaleo (1882) by John Singer Sargent made the artist’s reputation when it was first exhibited at the 1882 Paris Salon. The enormous canvas (237x352 cm) that depicts a flamenco performance became an overnight sensation with French audiences and critics.

The painting is an example of Hispanism, an intricate 19th-century phenomenon in Europe and the United States that refers to a widespread fascination with everything related to Spanish culture. Hispanism had a pervasive influence in different fields. Some famous examples include literary works by Theophile Gautier and Washington Irving, and George Bizet’s opera Carmen that premiered in Paris in 1875. However, for Sargent, who spent the autumn of 1879 in Spain, the subject of flamenco was more than a fashion choice. The trip to Spain was a formative experience: he copied works of old Spanish masters at the Prado Museum and made live sketches of folk dancers. While traveling through Southern Spain, he observed flamenco performances and became particularly fond of Andalusian Gypsy music. Thus, the choice of subject for El Jaleo was likely a combination of the growing market for exotic imagery and the artist’s admiration for Spanish music and dance.

The title El Jaleo refers to the uproar during the performance, when the audience encourages the dancers by clapping and chanting over the guitar music. The artist painted El Jaleo three years after his trip to Spain in a studio in France with the help of professional models, costumes and props. Even though Sargent's models were neither dancers nor Spaniards, the artist used his memories and knowledge of flamenco to capture an authentic atmosphere of dynamic performance. In this painting, the arrangement of figures conforms to the traditional presentation of flamenco. The performance is set on a small stage, and the dancer has other performers behind her in a line or a semicircle, leaving her little room to move. This setting also allows the musicians to follow the tempo set by the dancer as they play the accompanying music.

In producing El Jaleo Sargent worked methodically to achieve the spontaneity and drama of flamenco. He created many sketches and also the preparatory painting Spanish Dancer (1882). The dancer’s contorted pose is one of the most complex elements, that demonstrates the mastery of the flamenco technique and style. In the same way, the sketch Head and hands of seated musicians (1888) is part of the preliminary studies for the singer on the dancer’s right. The singer is caught amid a moving performance with his mouth wide open and his head thrown back.

After the Salon in Paris, El Jaleo was sold to Thomas Jefferson Coolidge, a retired American diplomat. In 1914, Coolidge gave the painting to his good friend Isabella Stewart Gardner - a leading American art collector, philanthropist, and patron of the arts. The painting was the centerpiece of the music room at the Gardener home in Boston, and today it remains in the city hanging at the Isabella Stewart Gardner Museum.

El Jaleo is a large painting by John Singer Sargent, depicting a Spanish Gypsy dancer performing to the accompaniment of musicians. Painted in 1882, it currently hangs in the Isabella Stewart Gardner Museum in Boston.

The painting was inspired by a five-month trip Sargent made through Spain and North Africa in 1879, which also yielded a smaller oil painting, The Spanish Dance (Hispanic Society of America). Chronologically and thematically, the painting is related to a series of works Sargent painted during a subsequent stay in Venice; these, too, include dramatic light effects, exotic models, and restrained coloring. Impressed by the costumes and theatrical manner of Gypsy dance, the artist returned to Paris and began work on a large canvas whose scale suggested a performing stage. The name El Jaleo refers to both the broad meaning of jaleo, a ruckus, as well as the specific dance known as jaleo de jerez.

Sargent planned the composition of El Jaleo for at least a year. The painting was preceded by a series of preliminary studies, focusing particularly on the dancer's stylized posture. The result of thorough preparation, El Jaleo is characterized by an assured and rapid handling, and may have been completed in no more than a few days.

Almost 12 feet wide, El Jaleo is broadly painted in a nearly monochromatic palette, but for spots of red at the right and an orange at left, which is reminiscent of the lemons Édouard Manet inserted into several of his large paintings. At odds with the academic practice of carefully modulated tones, Sargent dramatized the contrast between rich blacks and the shining white skirt of the dancer, caught in the strong footlights and painted briskly so as to suggest movement. The lighting also creates long and eerie shadows on the rear wall that comprises nearly half the painting.

The dancer, leaning asymmetrically, is placed to imply forward motion, from left to right across the canvas. The dancer is wearing a large, embroidered shawl wrapped around her shoulders, illustrating common flamenco costuming. The dancer's pose, with the outstretched left arm, is a depiction of standard flamenco dance technique and style.

El Jaleo is the most theatrical of Sargent's early major works. The lack of a barrier between the viewer and dancer helps create the illusion that we are present at the actual event; the manipulation of space and lighting communicates the energetic rhythms of the dance, its sound and movement.

El Jaleo is an example of Hispanism, the phenomenon of widespread fascination with Spanish culture throughout Europe and America in the nineteenth and early twentieth century.

The painting has been called both an example of John Singer Sargent's Impressionism and also his early affinity with the Realist movement.

Sargent exhibited El Jaleo at the 1882 Paris Salon, where the painting was purchased by a Boston patron, Thomas Jefferson Coolidge. It was the last subject picture that Sargent exhibited at the Salon, and his greatest success there.

In 1888 the painting was publicly exhibited in Boston, at which time museum patron Isabella Stewart Gardner, the heiress wife of a Coolidge cousin, expressed her interest in it. In 1914 she borrowed El Jaleo to exhibit in her museum, and constructed the Spanish Cloister gallery especially for El Jaleo, which is framed by a Moorish arch. Coolidge then gave the painting to Gardner, and Sargent presented her with an album of pencil drawings he had made as preparatory sketches for the work.